Chicago, IL -- (ReleaseWire) -- 04/27/2015 --After launching on Indiegogo just two days ago, Fantem and its flagship product Oomi are getting a great deal of attention after surpassing the $50,000 crowdfunding goal in just 37 minutes. Since then, the campaign has earned more than 750 percent of its funding goal and is steadily growing.

"We're thrilled to see our Oomi product validated with such a huge response from Indiegogo funders," said Colin Marshall, vice president at Oomi. "With 58 days left in our campaign, we're confident our fan-base, as well as distribution and integrations partners, will continue growing with this momentum."

- Oomi Cube is a sensor-packed brain for the entire system, including eight sensors and a night vision camera.

- Bulb is a color-changing LED bulb which also features a gradual sunrise-effect for wakeup.

- Oomi Streamer is the ultimate television companion, playing HD media directly from the Internet to TV.

- Oomi MultiSensor detects motion, temperature, light, UV rays, vibrations and humidity and can notify users if something suspicious happens in the home.

The system is available for pre-order on Oomi's Indiegogo page with Silver, Gold, Basic and Platinum kits ranging from $289 to $699.

About Fantem
Fantem is a developer of innovative products and solutions for the home. It is dedicated to the worldwide consumer adoption of smart home technology and the Internet of Things (IoT) through the development of home automation solutions that remove the complexity and frustration associated with existing systems. Together with its global team of experts and partners, Fantem set out to create the first smart home management system that is not only the easiest to install, set-up, and use, but also the first smart home system that is actually smart. The result of this effort, Oomi, is set to revolutionize the future of home automation, not only by positively impacting upon multiple areas (home safety and security, home environment and home entertainment) of users home lives, but by also making it accessible to the everyone a system designed for the rest of us! Fantem is based in Chicago with offices and strategic partners spanning four continents. 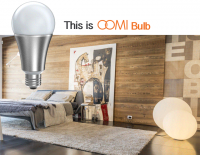