For 36 years, Gary Epple, of Granbury, Texas, worked for BNSF Railway Company, a subsidiary of Berkshire Hathaway Inc. On Sept. 24, 2010, BNSF instructed Epple, a railroad conductor, to make a stop in a rail yard located in Purcell, Oklahoma. The Purcell rail yard had no overhead lighting.

Epple exited the train and used a company issued lantern to perform his conductor duties in the dark and in the rain. When Epple was done, he walked almost a mile to reach the head of his train when he came upon a pile of broken ties and debris in the walkway.

"He came to a mound of debris blocking the walk path, which was too wide to step over," Huerta said. "He did what any sensible person in the same position would have done – he walked around the debris. He stepped onto an adjacent bridge, and then slipped, twisted his back and landed on his right knee."

Three months later, BNSF Railway Co., terminated Epple's employment. Epple was 58 at the time the accident occurred. He required a total knee replacement and three separate back surgeries as a result of his injuries.

Huerta filed a claim on Gary Epple's behalf under the Federal Employers' Liability Act, commonly known as FELA, which requires railroads to maintain a safe working environment. The lawsuit alleged that BNSF Railway Company was negligent by failing to keep a culvert clear for water flow and failing to clean up debris in the rail yard in Purcell, Oklahoma.

"I'm proud that our trial team obtained a win for Mr. Epple and his family against BNSF Railway Co.," Huerta said. "It took a long time, lots of work, creativity and perseverance."

The jury award of $1,860,969 included damages for lost earnings, physical impairment, and pain and suffering.

About Cynthia Huerta
Cynthia Huerta is an attorney at Schechter, McElwee, Shaffer & Harris, a Houston-based law firm that represents injured workers in Texas and across the nation.

Once a defense attorney for insurance and trucking companies, in 2012 she began fighting on behalf of accident victims. Her experience and knowledge of insurance company practices and defense strategies is an invaluable asset to her clients.

This experience, combined with a commitment to treating every client with respect, listening to their needs, and always keeping them informed of their cases' progress, has been a winning combination both for client satisfaction and case results. 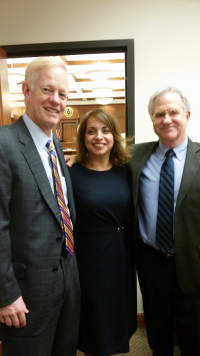 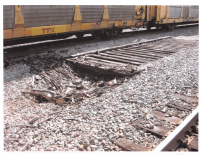