Cape Coral, FL -- (ReleaseWire) -- 05/08/2015 --All the guys out there trying to romance your lady, take note: Country music newcomer, Grayson Rogers is preparing to release his new single, "Angel Girl" next week. This hot and romantic song is sure to make your girl's cheeks turn rosy if you dedicate it to her!

The whimsical tune has a refreshing, upbeat rock tone to it and features deep, passionate lines like, "heaven must have broke the mold / on the day that you were made / surely God was listening / to the words that I've been prayin' / He picked out His best / and put her in a dress / and sent her to save my life / you don't need a halo to prove you're an angel / I can see it in your eyes" that would make any girl blush!

"I'm really excited to release this one. It has a new, different sound to it. It's really a great song for that springtime/early summer love that blooms this time of year," Grayson says.

Grayson, who has shared the stage with major country artists such as Craig Morgan, Dustin Lynch, Eli Young Band, Alan Jackson, A Thousand Horses and others, is currently preparing to hit the road this summer across the southeast U.S. to promote the new single. A complete list of his upcoming shows is available on his website.

"Angel Girl" is available for download on iTunes or Google Play now. 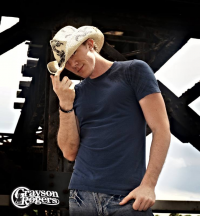