Two enemies forge a friendship, save a princess and discover that a truly happy dragon is the one who is true to himself... and this dragon wants to be a stand-up comic.

Los Angeles, CA -- (ReleaseWire) -- 05/12/2015 --The new children's picture book Nickerbacher, The Funniest Dragon is not only an imaginative fantasy with a modern twist, it's an easily devoured lesson in following your dreams. But there's another theme in Nickerbacher, The Funniest Dragon and it's one that's rarely touched upon in children's literature; the idea that parents have their own visions of what their children might be when they grow up, but they will love them no matter what career path they choose.

It's an affirmation that's brought to imaginative light in this latest offering from up-and-coming author Terry John Barto, and illustrator Kim Sponaugle.

Once upon a time, a young dragon named Nickerbacher stood guard for Princess Gwendolyn in a tall tower because his papa told him to.

But Nickerbacher wanted to do stand-up comedy. Everyday he would practice his routine on the princess.

And so begins the story of a dragon who wants to be a comedian, a princess who thinks he's truly funny and her prince who has dreams of his own.

Nickerbacher's fire-breathing father instructs him to guard Princess Gwendolyn at the castle because that's what good dragons do. Not wanting to displease dad, the aspiring stand-up comic secretly works on his comedy routine with Princess Gwendolyn, his adoring audience-of-one.

When the Prince shows up for the Princess he expects to battle a ferocious dragon. But Nickerbacher chooses to slay him with jokes instead of flames. It so happens the Prince also has an unfulfilled dream, but between the two of them only Nickerbacher has the resolve to go for it.

Nickerbacher learns that the road to success is sometimes bumpy. When he finally goes on stage for his big night, the curtain goes up and he realizes he's truly been bitten by the performance bug. When the curtain comes down at the end of the show, he discovers he has a proud papa who loves him no matter what.

When it comes to learning-related activities, a recent survey reveals parents spend about the same amount of time with boys as they do with girls, but there are noticeable differences in the types of activities. The data suggests that young girls are more likely to be taken to libraries, are more likely to own books and are more likely to be read to for longer periods of time than are boys.Learning to read is one of life's great milestones and Nickerbacher, The Funniest Dragon from AuthorHouse publishing, helps even the playing field for boys with a picture book that's smart enough to invite their sisters along for the ride.

About Terry John Barto
Terry John Barto directed and choreographed more than 200 regional theater productions and was the creative mind behind numerous television and cruise ship live shows around the world. As the creative director for Wings of Dreams Productions, Barto collaborated with other artists on a variety of diverse ideas and turned them into screenplays for animated films. He also helped develop popular action figures and dolls for several large retailers. His debut children's picture book, Gollywood, Here I Come! was released October 1, 2014.

Terry lives in Los Angeles where he enjoys Pilates, Yoga, and hiking with his dachshunds, Hunter and Mazie.

About Kim Sponaugle
Kim Sponaugle started her career as an illustrator with her first two book series "The Adventures of Beatrice" for Concordia Publishing House in 2001. She is a graduate of the Art Institute of Philadelphia with a degree in graphic design but found her "home" in children's book illustration. She enjoys life with her husband Jerry and their son Josh in Salem County, New Jersey.

"Nickerbacher, The Funniest Dragon" is from AuthorHouse publishing, a Penguin Random House company. It is available at Amazon.com and BarnsandNoble.com as well as Books-a-Million. 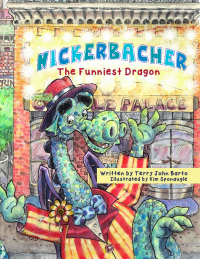