The UTurn Is for Any Smartphone User That Needs to Keep Using Their Phone in Comfort While it Charges With the Confidence that The Charger Cable Won’t Break.

Vancouver, BC -- (ReleaseWire) -- 05/29/2015 --As the old saying goes – necessity is the mother of invention. Andrew Barron, father of two teenagers with iPhones, had one mother of a problem; replacing broken iPhone charging cables on a regular basis. Not only was this getting expensive, it was also downright annoying. Andrew just couldn't understand how so many charging cables could break so often.

In his quest to get to the bottom of the problem he noticed that both his son and his daughter were stretching, bending and contorting their cables so they could keep on using their phones while they were charging. Mystery solved. This gave Andrew an "Aha!" moment that led him to design the UTurn; the first of its kind smartphone charging cable that comes with the bend in the cable built in. The result? Users can stay on their phones the entire time they're charging with no risk of damage or excess wear to the charging cable itself.

About UTurn
The UTurn is over six feet long and made of sturdy nylon and aluminum and sports a charge indicator and a reversible USB connector with Android and iPhone versions available in many different colors. After several iterations to the original design and four prototypes, the UTurn is ready for mass production.

A crowdfunding goal of $40,995, once met, will enable Andrew to roll out bulk manufacturing of the UTurn in both Android and iPhone formats. 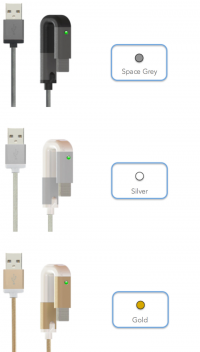