At home, out camping or after a natural disaster, Golar is there to provide electricity at any time.

Santa Monica, CA -- (ReleaseWire) -- 06/02/2015 --Prashant Shewa has been fascinated by solar power and has dabbled in this potentially limitless power source for the better part of 20 years; years before it was in-vogue and many years before homes and businesses started seriously using solar power as an alternative power source.

Earlier this year, Prashant and his team put together a string of ideas to create a completely portable solar panel that can deliver up to 100 watts of electricity anywhere and at any time. Coming in three different models delivering either 40, 60 or 100 watts, there's enough power on demand for any purpose. From glampers (glamorous campers) that just can't quite rough it during a camping trip to boaters who want plenty of spare power while out at sea or even the far less fortunate; those who struggle after a natural disaster.

The recent Texas floods forced officials to shut down power in the interests of public safety leaving tens of thousands of people in the dark in a situation where conventional generators are underwater, flooded and useless. The Golar, had it existed back when Hurricane Sandy struck, could've given millions of people electricity instead of leaving the population of entire cities and states struggling without it for as long as two weeks.

For anyone who desires or requires electricity, imagine the convenience of easy access to a cigarette lighter input, two USB ports and two AC outlets with every opportunity to add power strips to multiply the number of available electrical outlets powered by the seemingly infinite energy of the sun.

Crowdfunding is sought to take the fully functional prototypes to mass production. Funds raised will be used to source all components in quantity and enter into an agreement with a reputable manufacturer qualified of maintaining high quality and safety standards in delivering portable power to the people. 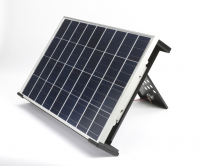 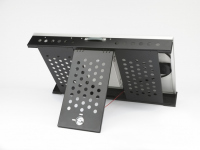 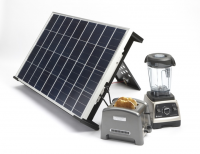