Branson, MO -- (ReleaseWire) -- 06/05/2015 --One of the most popular novelty artists of all time, Ray Stevens enjoys a remarkably long career with an amazing stretch of charting singles and major hits spanning four decades. However, Stevens' knack for sheer silliness translated across generations, not to mention countless compilations and special TV offers. Stevens, a skilled singer and producer, also performed straight country and pop, scoring the occasional serious hit. But, in general, hilarious novelty songs were his bread and butter.

Stevens was born Harold Ray Ragsdale on January 24, 1939 in Clarkdale, GA where he started piano lessons at age six and formed a band at age 15 called The Barons. At 17, he moved to Atlanta and worked with radioman Bill Lowery's music publishing company where one of his songs, "Silver Bracelet," got him a shot at recording for Capitol subsidiary Prep.

After joining the Mercury staff, Ray recorded several more novelty singles including "Ahab the Arab," released in early 1962. It was a smash hit, reaching the Top Five on the pop charts. Stevens then concentrated more on learning the ropes in the studio -- working with artists like Brenda Lee, Patti Page, and Brook Benton, and sometimes singing with the Jordanaires. In 1963, he played with Elvis Presley on the sessions for the "Fun in Acapulco" soundtrack. Stevens wound up with the Monument label, where he signed on as a producer and arranger and worked with a young Dolly Parton, B.J. Thomas, and producer Bill Justis, best known for his Sun Records classics.

An appearance on Andy Williams' variety show led to Stevens' signing with the singer's Barnaby label in 1970. He had a hit immediately with a straight pop song, the relentlessly cheery "Everything Is Beautiful," which displayed his heretofore unseen sentimental streak. "Everything Is Beautiful" was an enormous hit, climbing to number one on the pop charts and winning Stevens a Grammy.

Over the next few years, he gave us songs like "It's Me Again, Margaret," "The Mississippi Squirrel Revival," "The Haircut Song," "I Saw Elvis in a U.F.O.," and "Squirrel," all in the country Top 20, and they became audience favorites and signature songs. "He Thinks He's Ray Stevens" reached number three on the country charts, and the 1986 follow-up, "I Have Returned," actually hit number one. Both went Gold. In 1991, Stevens opened his own theater in Branson and played there until 1993. Most recently, Stevens has presented us with a new top tune called "Taylor Swift Is Stalkin' Me." As always, he is keeping his fans in stitches with the hilarious style only he can achieve.

About the Andy Williams Theatre
Andy Williams personally designed and helped to create the Moon River Theatre. He visited Branson and later planned to return to build a $12 million state of the art theatre he eventually named the Andy Williams Moon River Theatre. Moon River opened its doors on May 1, 1992. Andy had become the first non-country performer to open a theatre in Branson. And thanks to his ground breaking decision, other non-country performers and theme shows began to move in to the tiny town that would soon be known as the live music capital of the world. 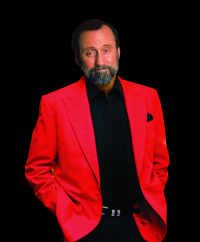