The American Bad Boy premiere, was a star studded, sold out, cross generational audience with a variable "who's who" of entertainment legends, including, Richard Lawson and Tina Knowles-Lawson, Glynn Turman, Lawrence Hilton-Jacobs, Essence Atkins, Keith Robinson, Telma Hopkins, Bill Duke, Marla Gibbs, Karyn White, The Whispers, Luenell, and more who came out to support the filmmakers and celebrate the June 2 release of their new film.

American Bad Boy tells the story of prominent preacher, Pastor Lovely (Obba Babatundé), whose son Samuel, (Antoine Cleveland) is filled with talent and ambition to become a famous hip-hop artist. Samuel's dream is in jeopardy when he runs into financial trouble. Fortunately, The Bruce (Katt Williams) makes him and offer he can't refuse. Samuel is forced to make a difficult decision and to keep a secret that could risk his relationships with his father and his girlfriend, Sonya, (Ciarra Carter). His "secret" is soon revealed, as his talent and good looks draw bigger crowds than he ever imagined.

"Directing American Bad Boy was life altering, it open me up to a whole new part of me. I am grateful for the trust the cast put in me to shape and mold there characters." says Obba Babatundé.

Babatundé goes on to say, "Don't let the title fool you. American Bad Boy has many layers, it is about relationships, it is about family, honor, and community, being grounded in one's spiritual beliefs, and challenges just how far some will go to peruse their dreams. It is about second chances, redemption, love and acceptance. There is something in this film everyone can relate to and a character just about everyone knows."

American Bad Boy also features the new Contemporary Gospel single "Testimony", from artist Fella Soul, as the first single from the film's Official Soundtrack on Thump Records. Fella Soul, aka Johnny Louis III, is a real life example of how someone perceived as "bad" can transform his or her life and create a new foundation for good, admitting "he was on a fast track to nowhere until he heard the voice of God." Today, he has four songs featured on the American Bad Boy soundtrack, touring and is completing his own album to be released later this year.

"The story of American Bad Boy was inspired by bold and innovative storytelling like "Pulp Fiction", "Car Wash", "Goodfellas" and "What's Love Got to Do With It?". All interesting stories with strong actors," says Goldsby. "Working on this film was a powerful experience. To have such incredible actors, a strong crew and a passionate director bring my vision to life, is truly a blessing." 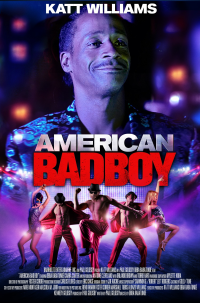