Winter Park, FL -- (ReleaseWire) -- 06/19/2015 --Successfully funded on Kickstarter in January 2014, "Runaway Nun," the first issue of Voghan's comic book, went on to become an Amazon Kindle bestseller. Soon after, Danger Zone, the imprint for mature audiences of Action Lab Comics, acquired the rights to the publication of the first four issues and the subsequent volume one trade-paperback, in a creator-owned publishing deal that, these days, has become the norm among Indie creator of comics.

Publishing contract in hand, and after securing the services of veteran illustrator Michael Lilly, Voghan returns to Kickstarter, to fund the production of the last two issues that would complete volume one, "The Road to Harlequin Island" of his MISBEGOTTEN series.

Set in the year 2097, this half-satire, half-adventure dystopian saga follows a priest sent on a do-or-die mission to save a Jesus look-alike from being sacrificed in a mock Passion play at the hands of a renegade scientist. The upcoming sacrilegious show is set on Harlequin Island, an artificial island in mid-Atlantic hosting a fantasy world for adults built by Sir Gottfrey, a transgenic artist gone rogue. Able to manipulate the DNA of vat-born embryos to create look-alikes of real human beings, Geoffrey has populated his libertarian republic with a workforce that resembles iconic figures of the past, anyone from Marilyn Monroe to Mahatma Gandhi (the janitors on the island are all Hitlers!). This is the world that Father Elano, the protagonist, has to infiltrate in order to kidnap the One Who Should Have Never Been Cloned…

Voghan's Kickstarter funding goal is $19,950, and this amount will be spent on honoring rewards, artist payments, and miscellaneous expenses. All Kickstarter backers will have access to the first volume almost a year before the wide release of the comic by Danger Zone.

To find out more about this campaign, please visit http://kck.st/1SlZwhZ

About Caesar Voghan
Caesar Voghan is an author of speculative fiction living in Orlando, FL, where he currently teaches college. He holds advanced degrees in Mathematics, Religious Studies, and Creative Writing. His short fiction has previously been published on http://www.365tomorrows.com 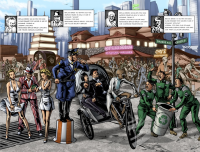 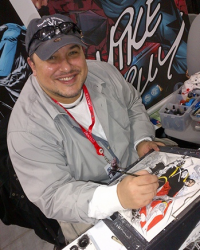