Longton, Staffordshire -- (ReleaseWire) -- 07/01/2015 --A UK charity, 'Water for Africa' in conjunction with Ogilvy &Mather, Paris was been awarded 5 CANNES Lions, including two 'Gold's', at the Cannes Lions Festival of Creativity 2015. They took home two GOLD's, one Silver and two Bronze for their amazing campaign, 'The Marathon Walker' with Water for Africa, which saw a woman from Gambia symbolically take part in the 42km Paris Marathon with 20kg of water on her head – a distance women walk in Africa every day to fetch water for their families.

It is the daily struggle for the association Water For Africa who for 13 years has been raising funds to drill sustainable boreholes in Africa. The Marathon Walker campaign was the brainchild of the creative team at 'Ogilvy & Mather, Paris', who wished to support 'Water for Africa' in raising awareness of the daily struggle of Millions of women across Africa.

As well as producing a documentary of 'Saibatou's journey to Paris, which will be available for distribution in July 2015, they also launched a new platform for online donations at www.themarathonwalker.com. Water for Africa also believed that the Paris Marathon was a strong illustration and symbolic of the kilometers travelled to access to drinking water in many villages in Africa. This is particularly the case for that of Siabatou Sanneh, a resident in Bullenghat in The Gambia.

As the majority of the 345 million people who do not have access to water in Africa, many women must walk every day, sometimes up to the equivalent of a marathon, to meet the needs of their families.

Siabatou participated symbolically at the Paris Marathon, in order to bring awareness to the public to the 280 billion kilometers travelled each year in Africa to find water and inviting them to participate in the funding of a borehole and pump for her village. This installation and the training provided to the inhabitants will enable them to have a sustainable source of drinking water for drinking, cooking, dispose of own sanitary, maintain a daily hygiene, irrigate crops and, in the end, out of the precarious.

A FUNDAMENTAL CHALLENGE FOR THE FUTURE OF SIABATOU AND FOR THE DEVELOPMENT OF MILLIONS OF AFRICANS.

1 person in every 6 in the world, including Siabatou and the inhabitants of Bullenghat do not have a source of drinking water in the vicinity. Although the Gambia river extends over the whole country, the water available to its shores is not own to the consumption, because of saline or contaminated by diseases or parasites. The only solution is to walk several times a day, many kilometers to the closest wells, for which however the quantity and quality of water are not guarantees. Beyond the health risks, this forced market prevented the population to spend time on agriculture, trade, or even to the education of children.

EVERYTHING STARTS WITH WATER

Water is a basic requirement for human life. Yet millions of people across Africa do not have access to clean water. Clean water prevents disease and saves lives. It also provides a platform for development. People cannot be expected to be enterprising if life is a constant, time-consuming struggle to find and recover water and then deal with the consequences of sickness and disease that result from contaminated sources. Clean water is not just about saving lives and giving children a fighting chance at life. It is the fundamental need of every civilization and the basis from which all other endeavours - education, healthcare, commerce - spring. Sheryl Greentree and Azar Hussain, the founders of Water for Africa, developed a new aid model that would not only ensure communities had clean water for a generation, it also started to embed the fundamental principles of economic development into those communities.

With most water charities seeing well failure rates of around 60% after five years, Sheryl and Azar knew that they had to take a different approach. They recruited local drilling teams, trained them, and, most importantly, engaged local communities to take ownership of the drilled boreholes. Once a borehole has been drilled, communities contribute to a ring-fenced social bank account to create a capital fund that will help meet the cost of any future repair. Any shortfall in the capital fund is met by Water for Africa, but even the smallest contribution engenders ownership in the community and alters behaviour, so that the community starts to think long term about infrastructure investment and future development. The local drilling team is trained to maintain, service and repair the borehole to ensure sustained, long term operation. Using this model, Water for Africa has been able to achieve a 100% operational rate for its boreholes. None of the wells we've ever drilled are out of service. This track record is unrivalled by any other water charity operating in Africa

Long term change is at the heart of everything Water for Africa does. Water for Africa does not drill open wells that frequently dry up as the water table falls. Instead we drill closed boreholes that tap into the bottom of the aquifer and ensure an inexhaustible supply of clean, reliable water. With over 120 boreholes drilled, Water for Africa has brought clean water to dozens of communities and transformed the lives of thousands of people. Children who would previously have faced the threat of sickness and disease now have a safe start in life. Women, who would previously have spent hours every day fetching dirty water, can now spend that time benefiting themselves and their communities.

Water For Africa's drilling techniques and our operational model mean that communities can be sure of clean water for at least a generation. That kind of long term provision leaves communities free to turn their attention to other developmental needs

An amazing achievement by one, brave and strong women

Water for Africa and Siabatou have participated in the Paris Marathon to raise awareness among the general public of this daily struggle and invite them to finance a water source in her village and many hundreds of villages across Africa to provide a safe, clean, sustainable source of water and to overcome the 40% - 60% of water points and systems which fall into ruin and disrepair.

- HALF OF THE AFRICAN POPULATION IS SUFFERING FROM A DISEASE RELATED TO THE ABSENCE OF WATER OR TO ITS POOR QUALITY
- EVERYDAY, 650 PEOPLE IN AFRICA DIE OF WATER RELATED DISEASES, THE MAJORITY ARE CHILDREN OF LESS THAN 5 YEARS
– IN AFRICA, 40 BILLION HOURS PER YEAR ARE PAST TO WALK FOR WATER

"Usually, I recommended to all those who have the opportunity to travel to Africa and to meet
with those people who, on a daily basis, must face up to the challenges which are unimaginable, to
access a resource as vital as water. Today, as we win the Gold Cannes Lion Award', we have to
commend Siabatou in completing her trip to Paris to show the world that having access to water is
a major issue for the future of her family, her village and of millions of people in Africa,"
said Sheryl Greentree, Co-founder of Water for Africa.

Water for Africa launched its campaign to raise funds "The Marathon Walker" via its Facebook page and its internet site, www.themrathonwalker.com. Each euro given will help to reduce by one meter the symbolic distance of 42,000 meters that separates Siabatou a achieving a sustainable source of drinking water. The budget will provide a drilled borehole and the installation and a water pump, as well as the maintenance of the installation and the financing of the repairs of the water system for the long-term.

Following the Paris Marathon, the inhabitants of Bullengath, the village of Siabatou, were provided with a brand new water system, which took 2 to 3 days to install and following 24 hours of pump test to test the sustainability and quality of the water before it is consumed.

Siabatou wanted to participate in this project for his village but also to bring the voice of the millions
of women who walk all the days as it in Africa. Since the age of 6 years, Siabatou has walked
many kilometers several times a day, sometimes up to the distance of a marathon, to look for water. Whatever happens I must walk every morning and might to the closest well. "Whether my children, , my husband or myself are sick, I have no other choice than to go there because our home cannot go without water" she says

About WATER FOR AFRICA
Water for Africa was founded in 2002 and registered as a UK charity in 2006, Charity Registration Number: 1113268, with the aim of bringing lasting change to the people of Africa. Starting with the most basic of all necessities, water, we set out to disrupt the old aid model and embed fundamental change that lasts a lifetime. For 13 years Water for Africa has delivered dozens of successful projects and changed the lives of thousands of people. Water for Africa's drilling techniques and our operational model mean that communities can be sure of clean water for at least a generation. That kind of long term provision leaves communities free to turn their attention to other developmental needs. 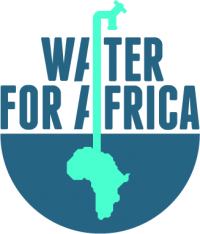