An eighteen years old student of wood science and technology, Mike Kova? is the designer of4MK-Wooden Bike. Mike is looking to raise $10,000 via Kickstarter for the official launch of his wooden bike.

Ljubljana, Slovenia -- (ReleaseWire) -- 07/15/2015 --Bicycles have always been the first love for the eighteen years old Mike Kova? who is also a professional competitor for team Radenska in Ljubljana. His father Marjan is a joiner and owns his own company named 4MK. Mike is also a student of wood science and technology. With help from his father, Mike completed developing 4MK-Wooden Bike in May 2013.

Initially, Mike and Marjan looked at their invention merely as an exhibit. However, the bike has already run over 2,000 kilometers and have been tested in France by driving in the tracks of Tour de France amidst great curiosity. The public response was even more encouraging at the Veteran World Cycling Championship.

Inspired by the response, Mike and Marjan decided to make further improvements to 4MK-Wooden Bike. At present, they have separate designs ready for the male and female version of the product. They have also patented 4MK-Wooden Bike, and honestly believe that it will be the next big thing on the market.

4MK-Wooden Bike is ready for the next step, but Mike Kova? needs funding assistance to start the production of his innovative wooden bicycle. He has recently started a Kickstarter campaign to raise adequate funds for this project. This project will only be funded if at least $10,000 is pledged by July 29, 2015.

To make a contribution to this project, please visit http://kck.st/1O69dhT

About Mike Kova
Mike Kova is an 18 years old student of wood science and technology. Bicycles are his first love, and Mike is a professional competitor for team Radenska in Ljubljana. With help from his father, Mike has developed 4MK-Wooden Bike. 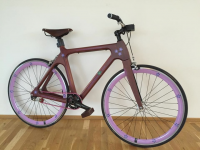 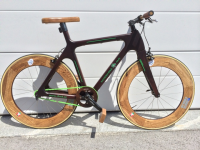 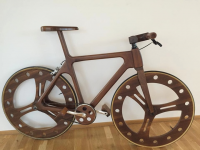