Apex, NC -- (ReleaseWire) -- 07/15/2015 --Bill Calvert, Co-Founder of BAF Technologies, a subsidiary of Westport Innovations Inc. (NASDAQ- WPRT) has joined Blue Gas Marine, Inc. (BGM) as an executive advisor, to assist the management team in accelerating the adoption of its Natural Gas Hybrid Fuel System technology, the first of its kind in the marine industry. Bill has spent more than 30 years in the compressed natural gas (CNG) industry.

Under Bill's leadership BAF grew into the leading provider of natural gas vehicle (NGV) systems in the United States, converting over 20,000 vehicles and achieving $42MIL in annual revenue*. Calvert will focus his efforts on leveraging his industry relationships and experience to establish BGM as an industry leader in marine alternative fuel systems.

Having worked directly for decades with The US Department of Energy (DOE) as well as state and local governments and advocacy groups to provide funding for the development and adoption of cleaner fuel technologies, Bill is well positioned to assist BGM in the process of accessing loans and grants for on-the-water CNG fueling stations and its' onboard fueling technology.

"We are excited and privileged to have Bill join our team. His track record of essentially creating the NGV industry in the US speaks for itself. His depth of work and legacy will be invaluable to Blue Gas Marine. He will help us immediately connect with key decision makers to fuel the growth and adoption of our revolutionary technology." said Miguel Guerreiro, President & CEO Blue Gas Marine, Inc.

Bill Calvert, said, "This opportunity allows me to be part of an exciting company in natural gas powered transportation, which is obviously close to my heart, and extends the reach of natural gas as an alternative fuel, to an entirely new sector, which is the marine industry."

About Bill Calvert
Bill Calvert began his career in the Alternative Fuel Vehicle industry in 1982 as national sales manager for Advanced Fuel Systems. Since then he has been involved in many AFV programs, providing leadership and direction for manufacturers, utility companies, governments, private companies, organizations and industry leaders. In 1992, he co-founded Bachman NGV that, in 2003, became BAF Technologies. In 2009, BAF Technologies was acquired by Clean Energy Fuels (NASDAQ- CLNE). In 2013, BAF Technologies was acquired by Westport Innovations Inc. (NASDAQ- WPRT) for $25MIL.

In 2012, Bill was the recipient of the esteemed NGV Lifetime Achievement Award from NGVAmerica, in recognition for his 30 years in the natural gas vehicles industry.

About Blue Gas Marine
Blue Gas Marine, Inc. is the leading green-energy corporation dedicated to make natural gas available for boats, as a clean and affordable fuel. The Company has developed a proprietary fuel system that allows existing marine engines to use natural gas as a hybrid or primary fuel. The system reduces fueling costs by 70% and reduces pollution by as much as 90%. Customers include: boat manufacturers, marinas, commercial fishermen, fleets, recreational users and government agencies. Blue Gas Marine, Inc. provides the only fueling option that delivers to customers a lower cost and lower risk solution when converting to a green alternative. Learn more by visiting BlueGasMarine.com or on Facebook.com/BlueGasMarine. 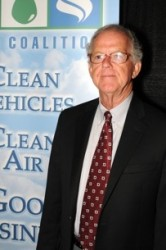