This eye opening Indiegogo Crowdfuding campaign is about a Quantum Leap in Bomb Detection Technology that can change the nature of the War Against Terrorism. Introducing the most advanced, accurate, and reliable bomb detection technology ever achieved; Shawn Deehan, Animal Behaviorist, Bomb Dog Trainer, President and CEO of Global Dynamic Security, Inc. states boldly and without condition, that the GDS Bomb Detection Super Dogs will have a major impact in fighting terrorism in the very near days to come.

Fredericksburg, VA -- (ReleaseWire) -- 07/16/2015 --Shawn Deehan's international security company, Global Dynamic Security, offers custom security solutions for unique security problems. The company's flagship product, The New and Revolutionary GDS Tactical K9 Bomb Detection Program, is the best in the world. This program has been scientifically and specifically designed to prevent and combat terrorist attacks as a proactive, offensive asset. These Bomb Detection Super Dogs can go out and find the bad guys, the bomb factories and the weapon's caches before terrorists can strike! GDS proves every day on the training field that their Tactical K9 Bomb Detection Dogs are much more sensitive to odor, much faster, more accurate, more reliable and more versatile than any other detection dogs in the world! Experts retired from the FBI, CIA, Special Operations and Law Enforcement have all declared The GDS Tactical K9 Bomb Detection Method to be the best they have ever seen and the most effective new asset to fight the war against Terrorism yet!

GDS Tactical K9's get the job done in a fraction of the time required by conventionally trained bomb dogs. They can successfully complete a search that takes conventionally trained bomb dogs a full hour, in one or two minutes! Amazing! These Bomb Detection Super Dogs are exponentially more accurate, thanks to their highly specialized training, pinpointing the bomb's exact location down to the size of a quarter.

Reliability is nearly 100 percent! These K9 heroes are conditioned to be hypersensitive to bomb odor and respond obviously and definitively to even the smallest, most minute amount of residual odor, left on the hands or clothing of a bad guy that has touched a gun or handled explosives, even after three weeks! These amazing animals perform a vast array of new, specialized, terrorism specific searches, that bomb detection dogs coming before them have never been able to achieve.

Mr. Deehan puts it succinctly: "Just like modern jet fighters replaced old, outdated, slow propeller airplanes of World War II, The GDS Revolutionary New Tactical K9 Bomb Detection Method is the new gold standard in Bomb Detection Technology. Out with the old and in with the new! The tide has turned."

Under Shawn's leadership, the team at Global Dynamic Security has spent twenty-five years of hard work, money, research and development, to reach a stage where they are ready to bring this game changing bomb detection technology to the world. Growing such a vital operation to find terrorist bomb factories, weapons caches and operatives hiding in plain sight, requires substantial growth capital. This is why GDS has opted to launch a crowdfunding campaign on Indiegogo to raise the necessary funds and greatly expand operations. The larger the success of the campaign; the greater the benefit to us all!

Contributions will be devoted to:

- Selection of top performing K-9 candidates from Holland between one and two years of age. These top performers come at a premium price and require careful and expert selection.

- Maintaining an administrative staff that efficiently and effectively assists in running the show.

To find out more about this campaign, please visit http://bit.ly/1eXYABA 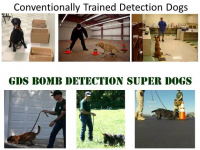 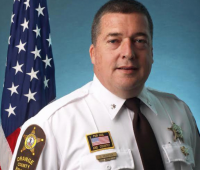