Nashville, TN -- (ReleaseWire) -- 09/05/2006 --Michele Goodwin, Professor of Law at DePaul University College of Law, has agreed to serve as an advisor to LifeSharers. LifeSharers is a non-profit network of organ donors that gives registered organ donors preferred access to transplantable organs. It was launched in 2002 to help alleviate the shortage of human organs needed for transplant operations. That shortage kills over 6,000 Americans every year.

"LifeSharers provides a powerful rebuttal to complacency and indeterminacy,” says Professor Goodwin. “The result might inspire a change in the beleaguered and ineffectual organ procurement system."

The shortage of transplantable organs in the United States is large and growing larger every year. According to the United Network for Organ Sharing, over 92,000 Americans are now on the national transplant waiting list. About 45,000 names are added to that list every year. More than half of the people on the waiting list will die before they get a transplant.

“Faith, confidence, and trust are not values commonly associated with the current organ procurement system,” says Professor Goodwin. “This is particularly true for those individuals and their families who suffer through protracted illnesses treatable by transplants that will never materialize because of the severe organ shortage.”

In a 2005 study conducted by the Coalition on Donation, 80% of respondents question the fairness of the organ allocation system while 91% support the concept of donation.

“Lots of people think our organ allocation system favors the rich and famous,” adds Mr. Undis. “More people will trust the system if more organs are given to registered organ donors.”

A 2005 survey published in Clinical Transplantation reported that 53% of the respondents believed that people who have previously agreed to donate their organs after death should be granted priority to receive cadaveric organ transplants over those who have not agreed to donate.

About 20,000 people receive transplants from deceased organ donors every year, but for every family that consents to donate another family refuses. Americans bury or burn about 20,000 transplantable organs every year.

LifeSharers membership is free and open to all at http://www.lifesharers.org or by calling 1-888-ORGAN88. There is no age limit, and parents can enroll their minor children. No one is excluded due to any pre-existing medical condition.

Michele Goodwin is Professor of Law at DePaul University College of Law, where she also directs the Health Law Institute and the Center for the Study of Race & Bioethics. She is the author of “Black Markets: The Supply and Demand of Body Parts.” More information about Professor Goodwin is available at http://www.law.depaul.edu/faculty_staff/faculty_information.asp?id=24

LifeSharers is a 501(c)(3) non-profit network of organ donors. Membership in LifeSharers is free and open to all. LifeSharers does not discriminate on the basis of race, color, religion, sex, sexual orientation, national origin, age, physical handicap, health status, marital status, or economic status. Since its launch on May 22, 2002, LifeSharers has attracted 5,891 members, including members in all 50 states and the District of Columbia. The LifeSharers web site is at http://www.lifesharers.org. 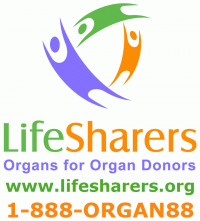