Cookie Cutter Girl Goes Down in Radio History on eaTV

Boston, MA -- (ReleaseWire) -- 10/12/2006 --Cookie Cutter Girl will go down in radio history in 2006. This modern day Pop Superhero Hits will have finally arrived ... in the Hall of Fame. Engage radio & eaTV's "HALL of FAME" awards are Evolvingartist.com's Grammy style awards show. The first ever of this annual event will be held in Southbride, MA on the 25th. CCG will be accepting an award for her song, "Jenny," which was in the top 10 for the maximum 13 weeks, one of the most requested bands on Engage radio by listener choice. Look for CCG soaring high on her 20th Compilation CD, the cover of the Indie Bible (8th edition), "Guitar World" magazine and an upcoming indie film. This Girl Power Goddess has been reviewed in Rolling Stone, is getting "big in Japan," and will be at the Granite Rock Music Festival in Manchester, NH on 10/28. This Pop Superhero endorses by Sam Ash Music, Minarik guitars and S.I.T. strings. Cookie Cutter Girl recently developed "Power of Pink Promotion" to help Independent artists, like herself, receive recognition by the music industry.

Cookie Cutter Girl is an independent musician, who can't afford a publicist or promoter, yet CCG is attracting the attention of several national TV producers. The Pop Superhero has been contacted by producers from MTV & Comedy Central, and the TV shows "Who Wants to be a Superhero?," "Wife Swap," and "The Tyra Banks Show," as well as the "Pussycat Dolls." Read more about the CCG's Super Powers at: www.CookieCutterGirl.com/cookiecuttergirlcharacters_text_iframe.htm Who wouldn't want a Pop Superhero to promote them? Cookie Cutter Girl lends her expert skills to start "Power of Pink Promotion," the newest branch of CookieCutterGirl.com. Lynn "Julian" aKa Cookie Cutter Girl recently developed P.O.P. to help Indie artists, like herself, get the recognition they deserve from the music industry. Knowing that Indie musicians are on a tight budget, her promotional packages start at a highly affordable $10. For a full list of promotional opportunities, go to www.cookiecuttergirl.com/sponsorshiplevelsbusiness_text_iframe.htm

Cookie Cutter Girl's, self-titled Girl Power Pop CD receives airplay on 500+ TV & radio stations Internationally. Most recently, CCG has invaded the Japanese market via distribution in Japan. Find CCG in Japanese at: www.musicforte.com/japan/lynnjulian. CCG is honored to have her music added to 20 different Compilation CDs, most of which were released over the past year. Are you a 'cookie cutter' girl, or did you break the mold? Find out today when you sign up to win a free CD, or maybe even a night out with Cookie Cutter Girl at: www.CookieCutterGirl.com.

Read More About the Indie Bible at:
www.indiebible.com/jul/

Read More About "Power of Pink Promotion" at:
www.PowerofPink.com

For a complete list of all 20 CDs featuring CCG go to:
www.cookiecuttergirl.com/pr20compilationcds_text_iframe.htm

Find out more about Minarik Guitars & Sit Strings at:
www.MinarikGuitars.com 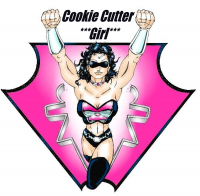