Originally filmed back in 1999, 3 die-hard KISS fans set themselves on a 6 month Pre- "KISS"toric journey to visit as many places as possible in NYC that had to do with the band's old stomping grounds.

Bands have fan clubs but KISS has a loyal army of fans. This DVD shows the dedication of 3 such fans. Originally filmed back in 1999, 3 die-hard KISS fans set themselves on a 6 month Pre-"KISS"toric journey to visit as many places as possible in New York City that had to do with the band's old stomping grounds, includes interviews and more.

They travel through New York City visiting such locations as Paul Stanley's childhood home, the loft on 23rd street and Electric Lady studios. Over 15 locations are on the dvd. They were also able to get inside some places, one of which "The Daisy" (considered one of the key starting places for KISS in the early 70's)was burned down approximately 2 months after the filming back in 1999. To our knowledge nobody else has footage of the legendary location. The dvd contains interviews with fans that saw KISS back in the early 70's, along with collections of original KISS merchandise. There's even an interview with a lady that knew Paul before they made it big.

One of the key features of this DVD is the 1st KISS Tour guide of New York. A simply designed tour guide within the DVD that is based on all of the locations that the 3 kiss fans went. The guide supplies the addresses of all the locations, so that you yourself can go ahead and set up your own kiss tour of New York.

The company has even released a promo video for the DVD. A move not usually done by new independent companies. Here is the link below.

The DVD will cost $14.99 plus shipping and will be exclusively available on Amazon.com for purchase starting on December 1. Here is the link for amazon.

Any questions regarding this DVD, it's release and it's content can be sent to marc@sicoproductions.com 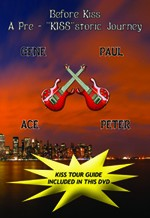