As a small child, Ellefson’s alcoholic home life was filled with chaos and instability. A talented father who drank to cope, and a mother who struggled to keep everyone happy. Despite a childhood dominated by alcohol, Melissa created a “normal” life for herself through the beauty and pain on the pages of her journals. Her desperate battle to win love from the opposite sex made her strong and weak at the same time. She herself would abuse alcohol for fifteen years, beginning her destructive journey at the tender age of fifteen. Through it all, she went on to become an award-winning Duluth television news reporter and radio personality, as well as a successful small business owner. As her alcoholism escalated, Melissa began to lose herself to its quiet seduction, but a glimmer of hope still remained that she would be able to find the woman she never knew – the woman who’d been suppressed and kept in a dungeon of death by the cold and mechanical force of alcohol. It was a gift of Grace that finally saved her from herself and made her a shining light to others who struggle to recover.

Melissa began working as a journalist in 1999 for KDLH-TV in Duluth, MN, where she served as reporter and Weekend Anchor. Melissa covered such high-profile stories as the murder of college student Dru Sjodin, Senator Paul Wellstone’s plane crash, Presidential visits and a week-long Marine boot camp in San Diego, CA. Melissa has also covered substance abuse issues and drunk driving accidents. She was nominated by the people of Duluth for “Best Local News Story” for a series on methamphetamines. She left KDLH in 2005 when the station was sold and the newsroom closed. After the demise of KDLH, Melissa worked for Clear Channel Radio as an on air personality and also at True North Television in Ashland, WI as a news reporter. True North Television closed its doors in May of 2006.

While at KDLH, Melissa served on the “Kids Come First” advisory board and spoke in numerous schools about her role as a journalist. She also served as emcee for many community and charity programs, including the Scleroderma Foundation, Murphy Oil Tree Tails Program and St. Louis County Historical Society. She also helped a group of children in wheelchairs called “Winners on Wheels” earn their media badge.

Melissa is active in the community as a speaker on recovery from alcoholism. Her speeches are extremely candid and brutally honest. She tells students about how she began drinking at age 15 and quickly descended into alcoholism. She wouldn’t stop for 15 years. Melissa wants students to know that attitudes and behaviors that start in school can continue into adulthood and cause serious problems or even death. She has spoken to thousands of students in many schools across Wisconsin and Minnesota, and also speaks to parents and community groups. Melissa also volunteered at the Douglas County Jail and ran a program that taught alcoholic women life skills.

“Standing Damaged” is a candid, no hole’s barred accounting of Melissa’s struggle with alcoholism. “I feel there is a real lack of women alcoholic role models, and very few books written on women alcoholics, yet here we are,” Melissa said. “I want to share my story with others in the hope that anyone out there who has a problem with alcohol won’t go through life the way I did. Those who suffer need to know that they’re not alone, and that they aren’t horrible people. There is so much more to do in high school and in life…Life is precious…I want people to know there’s another way to live.”

Melissa holds a bachelors degree in Mass Communications with a Psychology minor from UW-Superior, an A.A. degree from Fond du Lac Tribal and Community College and a broadcasting diploma from Lake Superior College.

Melissa has now been sober for several years and has left the media behind. She is now doing the work she says she was meant to do – helping others recover from their addictions. Melissa currently works at a drug and alcohol treatment facility in Duluth and is pursuing a masters degree in Addiction Counseling. She is active in her church, married to the love of her life, and dedicated to her wonderful daughter.

“Standing Damaged” retails for $14.95 and is available for purchase at the Port Town Publishing Book Store at 5909 Tower Avenue, Superior, WI, or on-line at www.porttownpublishing.com. The book is also available through Amazon.com. Port Town Publishing will be marketing the book to area stores during December and January, as well as in the tri-state area. Book stores interested in carrying the title may order it through the “Book Stores Only” page on the Port Town Publishing website at www.porttownpublishing.com. The book will also be available through Ingram Book Group and Baker and Taylor books by the end of December.

An interview with author, Melissa Ellefson Huray, can be arranged by contacting the Port Town Publishing offices at 715-392-6843 or via email at jhackensmith@porttownpublishing.com. A JPEG of the book cover is also available from the publisher. 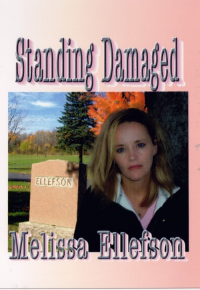