This Debut Album Release Is Bringing Sexy Back

The Red Light Riot's release of "War and Ribbons of Euphoria" is scheduled for January 19, 2007. The Red Light Riot will be appearing at The El Mocambo in Toronto to perform songs from this new album.

In 2006, the band began writing and recording its debut album, War and Ribbons of Euphoria, influenced by the work of such artists as Guns n’ Roses, Led Zeppelin, Pearl Jam and Audioslave. The album has received critical acclaim including a review at www.blindfive.com:

“Comprised of tracks with full levels of creativity and innovation, War and Ribbons of Euphoria should prove to be one of the best independent albums of the year”.

The Red Light Riot, a pure rock 4-piece band from Toronto is lead by Francine and Donna, two of Canada’s brightest female talents. Backing them are Kevin Mendes and Dave McMillan.

The night will also feature a performance by Tin Bangs. The Red Light Riot will take the stage at 10pm and this is an all ages event. 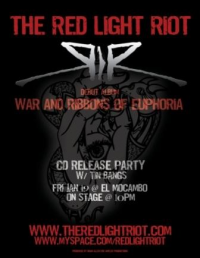