Remove the Frustration from Diaper Changing with Slick Diapers

Ask any parent and they'll tell you that changing diapers is never a fun experience. Whether because of a fussy little one, or diapers that just won't fit or work correctly, a simple change of a diaper can easily turn into an extended event with a resistant baby that just won't cooperate. Slick Diapers are the first breakthrough in diaper design in decades that completely reinvent how diapers are used and changed.

"Slick Diapers started as an idea when my daughter was born a few year ago. Changing diapers became the new norm. There were great days when my little angel would be anything but fussy and then there were those dreaded days when she would not cooperate with anything, including changing diapers," says founder and CEO Sangeeta Muthu on the inspiration behind the project.

Slick Diapers has introduced a new patent pending two-part, reusable and disposable structure. The two-part design consists of a waistband and the diaper bottom. When it's time to change the baby, simply take the soiled bottom portion off by peeling it at the waistband and then snap another one with an easy hook and loop fastener onto the waistband. Due to its two-part structure, it's almost impossible for leaks to be caused. Most of the time the waistband will not be soiled, but when it is, that is a quick snap to change as well. It's as easy and seamless as that.

On the Kickstarter campaign, Slick Diapers is offering an exclusive discount off retail to early backers of the project and diapers are available in different sizes ranging from 1 to 4. The product has been extensively tested for several years and manufacturers are lined up to produce and take the product to market upon successful funding of the campaign.

"All families deal with the struggle of diaper changing! But believe me, once you've used the Slick diapers, you will never go back to the 'old"'way. Slick diapers won't only save time but will also save you from any frustration you might have because of a normal diaper, like stressing out about possible leaks or dreading the tussle with your baby at the next diaper change," adds Muthu. "I've created and used these diapers for my baby and it has really put an end to my struggles. Make diaper changing a whole lot easier."

Slick Diapers is currently live and available to support on Kickstarter: https://kck.st/2LQASc4 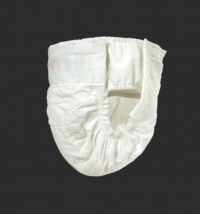