Richmond, VA -- (ReleaseWire) -- 03/06/2017 --Dogtown Dance Theatre presents the 4th annual Richmond Dance Festival, April 21 through May 6, 2017. This three-weekend festival will feature both local and national dance artists as well as international dance film artists in the heart of the historic district of Manchester in Richmond, VA. The festival will consist of live performances as well as dance for camera film screenings. This year's performances include choreographers that excel in modern dance, hip hop, contemporary ballet, and traditional African influenced dance styles, solidifying Richmond Dance Festival's commitment to create a common ground for diverse audiences to come together and enjoy dance art.

Richmond Dance Festival will show works by familiar local dance artists including Victoria Fink (Richmond choreographer and Old Dominion University and William and Mary dance faculty), whose new work Displaced, set on RVA Dance Collective, premiered during the 2016 In Light Richmond Festival presented by 1708 Gallery. The work is a multimedia dance piece made in collaboration with Richmond film artist Torian Ugworji and explores how elements of culture, class, and history can affect a person's home physically and psychologically. Two recent VCU Dance graduates, Johnnie Mercer (Johnnie Cruise Mercer/TheREDprojectNYC) and Chloe Bowman (ChloeIsaBow + Co, Brooklyn) are returning to Richmond to present work in the festival. These VCU dance alum are successfully creating and presenting work in New York after their graduation, and Dogtown is excited to bring their work home for Richmond Dance Festival.

Nationally acclaimed dance artist Winifred Haun will be presented the second weekend of the festival. Winifred Haun & Dancers is a professional contemporary dance company led by award winning choreographer, Winifred Haun. Founded in Chicago in the 1990's, the company has produced over 125 original dance works, including one full length ballet, and participated in over 300 public performances and events. Winifred Haun & Dancers has garnered many awards and accolades, including features in the Huffington Post, Chicago Tribune, and the Chicago Sun-Times. Major awards include the 2000 Ruth Page Award for "Outstanding Contribution to Dance" and the Oak Park Area Arts Council's 2009 "Best in Class" Award. In 2015, the company received an award from the John D. and Catherine T. MacArthur Foundation's International Connections Fund to perform and create a new work in Melbourne, Australia.

Richmond Dance Festival will also present dance film artists from around the globe. Dance for camera is a dance art form in which dance is a central theme of a film. At its best, dance films use filming and editing techniques to create twists in the plotline, multiple layers of reality, and emotional or psychological depth. This year's festival artists include David Strindberg, originally from Sweden, a film director based in London, UK. He creates music videos, fashion-, art-, dance- and short films, often with a concept developed from unexpected sources. David started out as a visual effects artist in 2006 but soon moved in to film directing. His works have been exhibited and screened at several festivals and galleries across Europe including The Swedish Museum of Photography, BUG, Zita, KRAF, Stockholm Dance Film Festival.

Richmond Dance Festival is also proud to present the dance for camera work "Moving Southwark" created by choreographer and creative director, Jevan Chowdry. He is part of the board of trustees for Visiting Arts United Kingdom, and Director of Moving Cities, an award winning project presenting world cultures headfirst thorough dance. His work in London, Paris, Prague, and Athens has earned significant accolades with recent nominations in Sweden, Spain, the US, and the UK.

Richmond Dance Festival is one of the main programming initiatives of Dogtown Dance Theatre that supports the organization's mission to be a home for all independent artists. The festival exists to support choreographers and dance for camera artists who are established or rising and exposure of their art to an audience. This festival provides an opportunity for artists to avoid the obstacles of performance, such as production and marketing costs, while offering them the privileges of performing in front of a diverse audience, made up of members throughout the entire Richmond community.

The 2017 production of the Richmond Dance Festival is made possible in part by grant funding from the E. Rhodes and Leona B. Carpenter Foundation, with fiscal sponsorship through the Virginia Repertory Theatre.

Donation based community dance workshops will be offered by the festival artists and all proceeds will help support Dogtown's mission to enlighten the Richmond community through creative expression and education across diverse populations. Each weekend will feature a variety of diverse talented dance artists whose artistic zest bring life to Dogtown's theater and reaffirms Richmond as the creative hub of Central Virginia.

About Dogtown Dance Theatre
Dogtown Dance Theatre provides a home for independent artists to create and present their work in movement, visual, and music arts. We seek to enlighten our local community by fostering expansive creative expression and education across diverse populations. 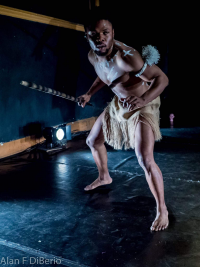