New cognac brand creates a run on creativity while incorporating the Charentaise Distillation Method christened in 1936. Marrying innovation to a timeless technique, Rivente is slated to create a niche of its own in the hearts of barkeeps nationwide.

Jacksonville, FL -- (ReleaseWire) -- 07/21/2017 --Ultimately crafted to whet the appetite of old-school bartenders as well as mixology experts, Rivente makes its way to the tumblers of America. Officially launched as a French cognac with an American attitude, the handcrafted spirit bucks tradition by fully embracing it. Giving cocktail creativity a boost while still tethered to everything time-honored about cognac, the brand ups the ante on stylizing a drink without guilt. And why wouldn't it? With a name that quite literally means "your way" Rivente is a perfect homage to self-expression dipped in what can only be described as tradition run wild. Sidecar anyone?

So what's special about the Rivente blend? For starters, it's distilled in a traditional Charentais copper still handed down from the Raclie family circa 1920 and aged four years in sought-after Limousin forest oak. Meeting all premium standards, the cognac uses grapes from one of the eight pre-approved grape varieties grown in one of France's six controlled vineyard areas. While adhering to what makes cognac, cognac in every sense of the word, the alcoholic beverage was ultimately created to do what its name infers. To be structured just enough to make it a seamless addition to any mixed drink one can think of.

Algen Albritten, the founder of Rivente, said of the forward-thinking eau de vie, "It's our devotion to move with the times while creating a perfect homage to a tradition that sets us apart. Mixologists want the freedom to use a high-quality cognac that will pair well when they mix cocktails. That said, we're not reinventing the wheel here, we're just giving the 'wheel' more options. All this thanks to our partners - an independent family-run house the that has been making cognac for almost 100 years."

Created to be enjoyed either mixed, chased, or straight, Rivente comes in VSOP/XO and Napoleon. Particularly luxurious when used as a base for cocktails like the beloved Toddy, Cognac Manhattan, or Cognac Cuba Libre the premium cognac has been described as both light and smooth.

About Rivente Cognac
Rivente is an American company based in Jacksonville, Florida that produces handcrafted cognac. The result of devotion to bringing the far-reaching traditions of cognac to the American marketplace in a non-traditional way, the company recently announced the launch of the spirit, Rivente. The company's founders are widely recognized in the hip hop music industry. 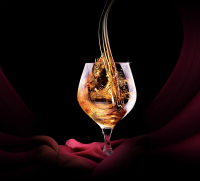