Movies Reflect Theme of "Love Is In the Air"

Cambria, CA -- (ReleaseWire) -- 08/22/2018 --Its first year was a smash hit, so the Cambria Film Festival is planning another four days of movies dedicated to the complexities of love. Scheduled for February 7 -10, 2019—just before Valentine's Day—the Festival will take advantage of the romantic Central Coast seaside setting that is Cambria and use four different venues to screen approximately 50 different feature and short films.

The Festival is currently accepting entries through the submittal site FilmFreeway.com. Features, shorts, documentaries, and animation are all sought—as long as they fall within the broad category of romance or romantic comedy or focus on the complexities of love. Final deadline for submissions is September 30, 2018.

"Last year, we received over 1200 entries to the Festival and we selected 7 feature films and 35 shorts to screen," says Dennis Frahmann, Director, Cambria Film Festival. "For 2019, we're enjoying even greater response and plan to increase the number of films screened. In addition, we already have lined up several filmmakers for personal appearances and are scheduling several fun food and wine events."

In addition to the official competition films, the Festival will also screen a few favorite full-length feature films from previous decades.

At the close of the event in a special champagne gala, the Festival will announce the following awards:

The festival is an official activity of the Allied Arts Association of Cambria, a local non-profit dedicated to local arts. The Festival receives funding from the Cambria Tourism Board and the San Simeon Tourism Alliance. Additional sponsors include Cambria Pines Lodge, Cavalier Oceanside Resort, New Times, and other local businesses.

For more information about the Festival, visit CambriaFilmFestival.com; details on ticketing purchases and schedules will be made available later this fall. To submit a film for consideration, please visit FilmFreeway.com. 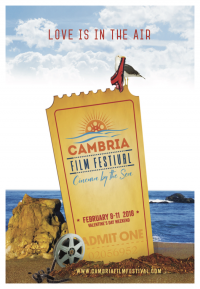 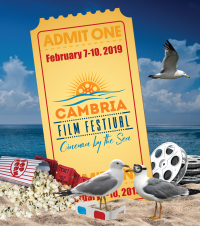