The new audio book has been released after the paperback version becomes a huge success on Amazon and other popular book platforms.

New York, NY -- (ReleaseWire) -- 11/02/2016 --Publishing house Little Nalu Pictures is pleased to announce the launch of a new audio book that is available on Amazon and iTunes. The audio book is Romeo and Juliet vs. Zombies, which was written by author Koji Steven and brings a modern take on the famous original book by William Shakespeare.

The Romeo and Juliet vs. Zombies novel was released as an audio book to make it more widely available. The author hopes the audio book will be as well received as the paperback version, which is available on Amazon (https://www.amazon.com/Romeo-Juliet-Zombies-Steven-Sakai/dp/1937365808).

The story, which is performed by Lauren Ezzo brings fresh life to the famous story and follows Romeo and Juliet, with Romeo being the only heir to the Montague name who dreams of making a name for himself as a playwright. Juliet, on the other hand, is the Capulet heiress, who was born a soldier who tries to get out of her insufferable life as a noblewoman.

The author of Romeo and Juliet vs. Zombies said: "My take on the famous story brings the two main characters into a world of Zombies, where Romeo and Juliet must come together before they overrun by a horde of ravenous, flesh-seeking un-dead.

Since being launched as a paperback, the book has achieved rave reviews on and off Amazon as well as gaining worldwide attention for being one of the hottest books of 2016. Book reviewers have called it the most exciting and gripping adaption on the famous story, while Amazon customers have called it a Nice twist on the old classic.

Jen Hates who reviewed the book on Amazon said: "This is an amusing take on Romeo and Juliet with zombies. At times you just want to slap some sense into both of the main characters, but they're teenagers after all. It's a quick and fun read."

"I hope people enjoy the new audio book as much as they have the paper back," said Koji Steven Sakai.

To learn more about one of the most exciting fiction books of 2016, and to purchase the audio book, please visit https://www.amazon.com/Romeo-and-Juliet-vs-Zombies/dp/B01MFBT99H/ref=sr_1_fkmr0_1?ie=UTF8&qid=1477764844&sr=8-1-fkmr0&keywords=amazon+audio+books+romeo+%26+Juliet+vs.+zombies

And it is available from iTunes https://itunes.apple.com/us/audiobook/romeo-juliet-vs.-zombies-unabridged/id1170226523

About Koji Steven Sakai
Koji Steven Sakai has written five feature films that have been produced, Haunted Highway (2006), The People I've Slept With (2009), Monster & Me (2013), #1 Serial Killer (2013), and Dying to Kill (2015). He also served as a producer on The People I've Slept With, #1 Serial Killer, Dying to Kill and Dwayne Perkins: Take Notes (2015), a one-hour comedy special. His screenplay, Romeo, Juliet, & Rosaline, was optioned by Amazon Studios. 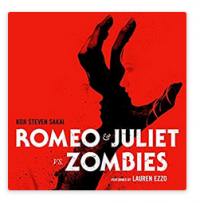