La Jolla, CA -- (ReleaseWire) -- 08/10/2015 --As far as today's books go called, "novels," there really is is not a whole lot novel about them,  and the "whole lot," ranges from very little to nothing. On the other hand the book and musical album, ROOMS, may be a kind of literary and musical sunrise, as it is both a "poetry novel" and "rock opera," unlike any other!

ROOMS book and album share something else in common besides the name, and that is, Wilson Sherman, the author, and lead vocalist for POETRY BAND, http://www.poetryband.com the modern theatre enterprise that performs the book musicals. Wilson recently completed his third poetry novel entitled, PSALM, book three a kind of trilogy that also includes EXIT, and ROOMS. These books are indeed novel as they are not a compilation of poems, but rather poetry spirituals, a kind of epic poem or novel. When they are performed by POETRY BAND for live recordings, the combined spoken word, song, long jams, provide a unique listening experience, and poetry novel. The sixty plus minute r/t albums, breaks the traditional sound barrier, advancing the Christian spiritual, music theatre, and the arts (ROOMS Cover.docx). "By means of sounds of spiritual music, and it's accompanying expression of articulate speech, is a bold, daring, and most masterly conception, that the public embraced and approved with avidity," William Blake.

In the realm of Christian music spirituals, it may be argued that the greatest works are all classical, notably, "Mass in B minor" by Bach, Handel's "Messiah"  and Beethoven's, "Missa Solemnis."  There is no argument about the beauty and importance of these grand musical works that are basically Christian musical tributes, however, they mainly stand out musically as from a literary standpoint they are basically combined masses, and musical worship, with no real storyline or play. ROOMS, on the other hand, is a musical play that explores the whole human experience from the dawning of light, to the Garden of Eden, the Fall, wayfarer redemption, and the finale...the appearance of Jesus; the inspired Holy Ghost, or perhaps the second coming of the Lord...you decide!

Wilson's "poetry novel" entertains unusual literary execution utilizing an economy of words, and no punctuation, which helps to marry words and music, rendering a cinematic effect to the reading.  LA CA MUSIC (ASCAP) publishing company maintains that ROOMS has the potential for an amazing film experience unlike any other, and is currently offering the film rights for an original movie, http://lacamusic.wix.com/rooms

Wilson's newest book and album spiritual, PSALM varies from the others works, as there is no rhyming in the book or album, and the recording is solely guitar and vocals without any percussion. The positive praise work flows in spiritual word stream through the realms of "God mind." PSALM stands alone as a unique Jesus ode both in book and music.

POETRY BAND CDS, and Wilson's books are available at Amazon. Film Rights inquiries can be sent to info@lacamusic or 858-834-4344. 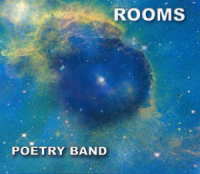