Rover Closing in on Mars for a Late Sunday Landing - Celebration Planned in Greenville, NC

GO-Science Celebrates the Monumental Landing of the Curiosity Rover on Mars on August 4th from 6-9 p.m. at the Pitt Community College Goess Center in Greenville, NC.

Greenville, NC -- (ReleaseWire) -- 08/03/2012 --The Curiosity rover is closing in on Mars for a late Sunday landing as spectators from around the nation hold their collective breath as the rover hits the Martian atmosphere at 13,000 mph, 154 million miles from Earth. Then it is 7 minutes of terror between the rover entering the Martian atmosphere and safely landing on the red planet to begin its search for life.

Back here on earth GO-Science is joining NASA and worldwide audiences in a celebration of the Mars landing of NASA’s Curiosity rover. This free event is scheduled for Saturday August 4, 2012, just 24 hours before the impressive landing. The program runs from 6-9 PM and is being held at Pitt Community College in collaboration with the nationwide PlanetFest program.

Join GO-Science for an interactive event full of fascinating hands-on activities for all ages. Celebrate the landing with live downlinks straight from NASA including an exclusive simulcast with PlanetFest featuring over 30 scientific experts and dozens of artists and performers. Participants will engage in exciting and thought-provoking demonstrations and exhibits while also having the opportunity to get a close-up view of space through high-powered telescopes. The event will also feature a virtual rover experience perfect for all adventure seekers.

NASA’s Mars Exploration Program launched the Mars Science Laboratory mission and its rover, Curiosity, to Mars this past November. The Curiosity rover was specifically designed to find out about Mars’ habitability, or ability to support life. Scientists want to figure out whether Mars once had an environment that could sustain small life forms called microbes.

The Curiosity rover will carry the biggest and most advanced set of instruments to ever be sent to explore Mars’ surface. Curiosity will take samples from Martian rocks and soil and analyze the data for evidence of the chemical building blocks of life, such as carbon. This information will be used to assess Mars’ past environment and habitability.

The Mars Science Laboratory mission was launched November 26, 2011 on Cape Canaveral Air Force Station in Florida. Learn more about this spacecraft by visiting, http://mars.jpl.nasa.gov/msl/. The Mars exploration Program is a long-term research project that uses robotic exploration to find out more about our red planet neighbor.

About GO-Science
GO-Science is a non-profit organization that works to bring informal, interactive, and hands-on science education programs to the public of eastern North Carolina. With over 10 years of experience, GO-Science has the unique ability to bring science education and activities to children and adults of all ages and abilities. Please find out more by visiting, http://www.go-science.org/ 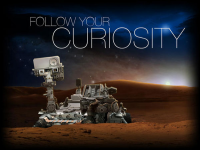