San Antonio, TX -- (ReleaseWire) -- 11/07/2017 --South Texas Atheists for Reason (STAR) are excited to announce an atheists' comedy show fundraiser this coming Friday, November 10, 2017. The event takes place at 10pm Central Time at The Blind Tiger Comedy Club, 902 NE Loop 410 (Inside the Magic Time Machine), in San Antonio, Texas. This is the first fundraiser of this type and the members of STAR are very excited. The money raised at this event will help them purchase supplies for a homeless giveaway, provide marketing materials for their booths at events, and to purchase decorations for their social events.

"The upcoming STAR Atheist comedy night serves multiple purposes. Besides creating a unique fellowship opportunity for Atheists in the south Texas community, this event also helps raise funds for the STAR organization which can then be used for educational, infrastructure or marketing purposes," said Vicki Gettman, the President of South Texas Atheists for Reason. "The idea of an atheist comedy night is starting to catch on within the national secular community, and we've already seen some successful shows that are currently being booked throughout the entire Northwest of the United States."

Gettmann continued, "These comedy shows offer a niche entertainment option for Atheists that often times feel disenfranchised and disconnected from their religious co-workers and families. Atheism may be incredibly popular online, but bringing these free-thinkers out of their homes and into the real world is the first step of building a strong secular network within every community. We hope everyone interested can come out and have a great time while supporting our organization."

Tickets and further information on the comedy show fundraiser can be accessed at this website. As STAR is an IRS-recognized 501(c)(3) charitable organization, all donations and sales are tax-deductible.

About South Texas Atheists for Reason (STAR)
South Texas Atheists for Reason (STAR) (http://www.southtexasatheistsforreason.org) is a group of positive people who are secular humanist and atheists. STAR's founders created a community which is based on service to fellow human beings, taking care of our natural environment, and promoting all of the sciences.

STAR is supported by the Military Association of Atheists and Freethinkers (MAAF) for their atheist/humanist-led meetings. Further articles on these meetings at Lackland Air Force Base can be found at https://unitedcor.org/tag/lackland-afb/.

About United Coalition of Reason
United Coalition of Reason (http://www.UnitedCoR.org), headquartered in Washington, DC is committed to promoting science and reason, nurturing unity and developing cooperation within local communities. They donate time, resources and cutting edge technology to help a variety of local non-theistic groups grow their presence, expand their outreach and present a positive face for non-theism by doing good together. 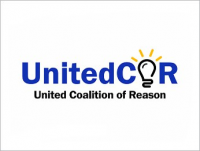