Los Angeles, CA -- (ReleaseWire) -- 05/14/2018 --When in combat situations, Marines and their Corpsmen develop strong bonds that stay with them long after the fighting has finished. Shoulder to Shoulder with Marines on the front lines are their Corpsman, providing medical care needed to maintain combat readiness.

One of these Combat Corpsmen, nicknamed Doc, has created a film to showcase that bond and how it stays with these men and women throughout their lives. Now that he has retired from the military, Doc works as a director, writer, actor, and comedian through his company, Doc's Office Productions Inc.

Many of his productions are geared towards American veterans, and his latest project is no different. Saved Rounds is a dark comedy that tells the tale of an Iraq War veteran who fell victim to alcoholism and survivor's guilt in the aftermath of his deployment. He experiences a vision of the ghost of one of his fallen brothers-in-arms, so he goes on a journey to give a gift to his friend's family in an effort to bring peace and closure to all of them.

Although the story is fictional, it is based on some of Doc's own experiences fighting in Iraq and after he returned home. Former Marines and members of other branches of the military will be able to draw parallels to their own stories, as many veterans share common experiences and feelings.

In addition to providing entertainment and solace for veterans, Doc's film is also geared towards those who may not have any military experience at all. The goal here is to give non-military-affiliated people a glimpse into this unique world so that they can better understand what our veterans go through.

To help bring this project to fruition, Doc has launched a crowdfunding campaign on GoFundMe with a funding goal of $25,000. At the time of this release, the campaign had generated over $12,700 towards the goal. The funds raised will be used to cover production expenses, including insurance, equipment, permits, film editing and travel. Those who contribute $50 or more to the campaign will be rewarded with a digital copy of the film when it is released, as well as their name in the ending credits. 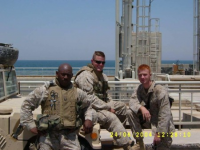