Los Angeles, CA -- (ReleaseWire) -- 09/12/2017 --Zombies have long been the favorite choice among film makers looking to make low-budget horror movies but that may change once the new, Brit comedy-horror, Scareycrows, is released this autumn.

Set in a quaint, English seaside town, the film offers an alternative nightmare to the threat of a zombie apocalypse.

When the townsfolk of Sidcombe begin disappearing in the run up to the annual Scareycrow Festival, no one believes that the innocent-looking straw men can be responsible. It is only when a series of gruesome murders take place that it becomes clear that an evil power is at work.

"I love zombie movies," said Lucy Townsend, the director, "but I wanted to explore something a little different."

Rather than confront her characters with a multitude of the undead, Lucy has chosen to menace her imaginary world with a horde of homicidal scareycrows brought to life by a vengeful witch.

"I love the strangeness of scarecrows." Lucy explained. "They look human and yet they are not human. I think a lot of people find them unnerving and it's that unease that I wanted to explore in the film."

About Scareycrows
Combining larger-than-life characters with some genuine shocks, Scareycrows has plenty of twists and memorable one liners. A talented young cast create a believable world where the seedy charms of an out-of-season seaside town provoke dark and unexpected humor.

April Hughes is outstanding as the chillingly evil Cassie, conveying an abundance of hatred and loathing with little more than a tilt of her head.

Scareycrows is being released by IndieRights and will have its World Premiere on September 22nd in Los Angeles before being released in the UK on October 31st. 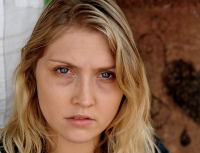