Orlando, FL -- (ReleaseWire) -- 08/19/2016 --The second annual PinPics/PinCon World Celebration and Pin Trading Event will take place on Sunday, August 28, from noon to 6:00 p.m. at the luxurious B Resort and Spa located near Disney Springs in Orlando, Florida. Details of the free event were released during a panel at the 2016 San Diego Comic Con. PinCon World piggybacks on the Disney Pixar Party on August 26-27 which celebrates 30 years of magic from the Pixar Animation Studios.

"People are connecting to a memory they have of either a ride or a character or something they love. That's how you start a collection - you have a personal identification." Tony Award winning actor and pin collector Christian Hoff

Since 1999 PinPics.com has been a prime site for celebrating and trading pins, particularly Disney-themed pins, with more than 135,000 pins cataloged. This database is used by Disney Archives and pin traders around the world to catalog their collections and to connect with other traders around the world. The PinPics/PinCon World Celebration is a free event that brings together thousands of these fans to share their experiences as well as their pins. Currently there are nearly 100,000 members in the PinPics database, many hoping to find that elusive pin that will help them complete or begin a set.

The Disney pin program began in 1930 and now boasts a retail market of more than $100 million a year, with a robust secondary market that rivals many better known collectibles. Fans of Disney and related pins use the PinPics system to search by character, ride, theme or other keyword to identify possible trading partners. At its height, the site sees more than 50 million pages views a month and close to 1 million trade requests from around the world.

"People are connecting to a memory they have of either a ride or a character or something they love," Hoff explained. "That's how you start a collection - you have a personal identification." Speaking about the popularity of the PinPics.com site, he said, "As robust as it is, it is a relatively undeveloped or underdeveloped collectible community, we are so excited that PinPics is going to make it a global community with PinCon World."

Learn more about PinPics at pinpics.com and visit pinpics.com/PCWM/event.html to find out about the PinPics/PinCon World Celebration and Trading Event. For information about Christian Hoff, visit his website at christianhoff.com.

About Pinpics.com
Since 1999 PinPics.com has been a prime site for celebrating and trading pins, particularly Disney-themed pins, with more than 135,000 pins cataloged. 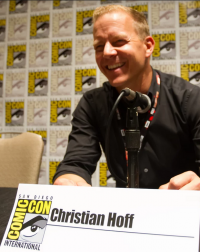