Seattle, WA -- (ReleaseWire) -- 09/24/2018 --Gypsy Temple, an up and coming alt-rock band in Seattle, is launching the Make Your Voice Heard Loud Tour, a series of performances on the back of a flatbed truck at local high schools and colleges, starting on Voter Registration day on September 25th.

"We want to encourage our generation to step up to participate in our political process, whatever their beliefs," said 19-year-old University of Washington student, Cameron Lavi Jones who started Gypsy Temple in middle school. "We know that 18 to 24-year-olds vote at much lower rates – more than 22% less - than other generations and we want to do our part to change that." The first step, he said, is to ensure that young people are registered to vote and then get out and actually vote on election day.

To help accomplish this, the band will visit local schools and colleges, starting at Shoreline School District's Shorecrest High School, to perform their music while volunteers register students to vote. The performance will be at the Shorecrest campus at 15343 25th Ave NE, Shoreline, WA 98155 from 12:00 PM to 12:45 PM.

"We love the idea of bringing music and a bipartisan message of voter registration directly to young people," says Washington Secretary of State, Kim Wyman. The tour, a production of Gypsy Temple's management team, Dreaming in Color Entertainment, has bipartisan support with endorsements from Senator Lisa Wellman (Democrat) and Kim Wyman (Republican) along with sponsorship from the League of Women Voters, Washington Bus, APACE, and the King County Department of Elections.

Kevin Chase, Superintendent of Yakima ESD jumped at the opportunity to have Gypsy Temple perform. "We are always looking for creative ways to engage students in civic life and are excited to be able to bring a concert by a rising local band of young people to our community while they register to vote in the spirit of the original Rock the Vote Campaign."

About Gypsy Temple
Gypsy Temple is a multi-racial alt-rock band composed of local college students. The band's leader Cameron Miles Lavi-Jones MC'd the Event and his band performed at the March for Our Lives rally with Dave Mathews and Brandi Carlile in Seattle earlier year. Gypsy Temple is committed to assuring that youth have a voice in our state and our country. 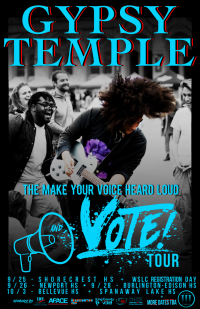