"Spotlight on Capitol Hill continues to bring our listening audience information about the excellent work being done by members of both the House and the Senate. The support and excitement about the show on Capitol Hill is encouraging," says Lamont Banks, AJC Radio Host. Our trips to Washington D.C. have proven to be more successful than we could have hoped for, and well worth it. We've made a lot of progress. Please join us this week as we highlight Senator Mike Lee, a champion in the Senate," add Banks.

In 2015, Senator Lee along with colleagues had a bipartisan meeting at the White House with President Obama addressing over-criminalization, over-incarceration, and over-sentencing in America. Senator Lee is passionate about improving our economy, national security, religious freedom, crime, and education. "Throughout his career, Lee earned a reputation as an outstanding practitioner of the law based on his sound judgment, abilities in the courtroom, and thorough understanding of the Constitution." (https://www.lee.senate.gov/public/index.cfm/about-mike)

Amid the mass shootings that have escalated in America and around the world, there is a very controversial bill introduced by Senator Lee that has raised more than a few concerns: The Silencers Helping Us Save Hearing Act of 2017. This bill would ensure the elimination of all federal regulations of suppressors. However, after the horrific scene that played out in Las Vegas on October 2, 2017, our elected officials will not be voting on the bill any time soon. Hilary Clinton tweeted: "The crowd fled at the sound of gunshots. Imagine the deaths if the shooter had a silencer, which the NRA wants to make easier to get." She makes a very persuasive point which happens to be an indisputable fact. How many more people would have been injured or lost their lives, had it not been for the fact, they heard the gun fire and ran to safety? "As always, Spotlight on Capital Hills brings a unique perspective to discuss these very important issues, and illustrate what the American people are most concerned about," says Banks.

"Elected in 2010 as Utah's 16th Senator, Mike Lee has spent his career defending the basic liberties of Americans and Utahans as a tireless advocate for our founding constitutional principles."... "Lee graduated from Brigham Young University with a Bachelor of Science in Political Science... Lee spent several years as an attorney with the law firm Sidley & Austin specializing in appellate and Supreme Court litigation, and then served as an Assistant U.S. Attorney in Salt Lake City arguing cases before the U.S. Court of Appeals for the Tenth Circuit. (https://www.lee.senate.gov/public/index.cfm/about-mike)

"Today, Lee fights to preserve America's proud founding document in the United States Senate. He advocates efforts to support constitutionally limited government, fiscal responsibility, individual liberty, and economic prosperity." ... "Lee and his wife Sharon live in Alpine, Utah, with their three children. He is a member of The Church of Jesus Christ of Latter-day Saints and served a two-year mission for the Church in the Texas Rio Grande Valley." (https://www.lee.senate.gov/public/index.cfm/about-mike)

Join AJC hosts as they highlight the accomplishments of Senator Mike Lee on this week's show. Call into the live show at (646-200-0628). AJC Radio hosts welcome your questions and comments. 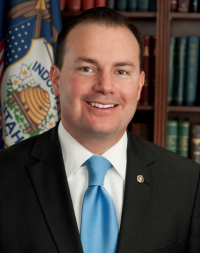