Senior Poker Tour "Back to the Beginning Again"

Las Vegas, NV -- (ReleaseWire) -- 03/31/2016 --Senior Poker Tour, after completing its second very successful year, is headed "Back to the Beginning Again" for a four day Senior Poker Tour Series at the Horseshoe Casino in Tunica, Mississippi from April 21-24, 2016.

"We felt it was only fitting to once again celebrate our anniversary back to where it all began at the Horseshoe Casino in Tunica. We anticipate this will be an annual event. The support at this event from both the players and casino has been phenomenal. Each year we have had players drive from as far as Chicago from the north and Texas from the south to attend this series. The past two years have been tremendous for us and the support of our players has been phenomenal. It is always heartwarming returning to where it all began." Says, Hal Coblentz, SPT Vice President. "Tunica has been somewhat of an annual reunion. We always love coming back to Tunica to celebrate with our old friends and make new ones." Said Lupe Soto, SPT CEO. "We are excited about 2016 and beyond. Our growth is not only on land as we will be having our second Senior Poker Tour World Championship held at sea with Card Player Cruises on May 20th on a cruise to Alaska.

"Our focus is on continuing to develop the brand. We not only will develop the brand in new local markets but in new media outlets as well. We want to bring poker back to mainstream television and feature not only a market segment that people can relate to, but players as well." Added Hal Coblentz.

Please visit http://www.SeniorPokerTour.com for more information and upcoming tour dates. If you would like to join our VIP list for text updates, text 'SPT2016' to 7606703130. Msg&data rates may apply. To unsubscribe from this list reply 'STOP' to 7606703130.

About SPT™
Senior Poker Tour™, LLC is a company engaged in the creation and marketing of tournament events featuring players from around the world 50+ years and over. For upcoming SPT™ news and events, visit http://www.seniorpokertour.com. SPT™ is an LLC in the state of Nevada. Casinos wishing to be a part of the newest and most promising poker tour on the market today may contact partners@seniorpokertour.com 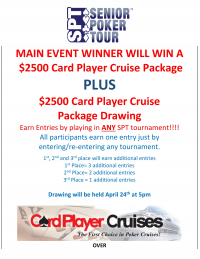