Old Lyme, CT -- (ReleaseWire) -- 10/27/2017 --Sennheiser announces that the AMBEO SMART HEADSET – the audio specialist's intuitive, compact and mobile binaural recording headset — is now shipping in the U.S. and Canada. First showcased earlier this year at CES 2017, the AMBEO SMART HEADSET makes 3D audio a reality on a mobile device by capturing incredibly detailed and realistic immersive 3D recordings. When played back on a pair of stereo headphones, the recordings achieve a stunning 3D experience by placing the listener inside the soundscape, replicating the direction of sounds and the natural spatial characteristics of a location.

The AMBEO SMART HEADSET captures its highly detailed and realistic three-dimensional audio recordings by way of two omni-directional microphones integrated in the ear pieces. These work in tandem with a premium A/D converter, mic preamp and SoftLimit technology from Apogee.

The two earpiece microphones, spaced at perfect binaural width by the listener's head, capture the subtle differences in timing, volume and timbre that occur as sounds from different directions reach each ear. When played back on any pair of headphones, the recorded audio simulates the way sounds are heard naturally by the ears, recreating a lifelike high-fidelity audio experience that places the listener directly within the captured sound field. The effect can convincingly transport the listener to any locale, from a bustling city block to a secluded spot in the wilderness, and is a powerful complement to high-definition video.

"We are eager for North American consumers to begin exploring the possibilities of our AMBEO SMART HEADSET," says Stefanie Reichert, Director Trade Marketing, Retail, Americas at Sennheiser. "The AMBEO SMART HEADSET is an exciting leap forward for content creation, and we look forward to the many incredible audio experiences our users will capture and share."

To deliver a convincing audio experience, the AMBEO SMART HEADSET utilizes a premium Apogee analog-to-digital coverter, mic preamp, and SoftLimit technology to ensure dynamic detail, clarity and accuracy. Apogee's SoftLimit is a unique technology that automatically optimizes recording levels so you do not have to worry about distortion. All of this skillfully captured sound is delivered through the Lightning port of your iOs device as pristine digital audio and back to your ears through high-quality Apogee digital-to-analog conversion.

A customizable sound experience
Using the AMBEO SMART HEADSET's Smart Slider, users can adjust the mic sensitivity to normal or loud environments such as concerts, ensuring pristine, distortion-free recordings in any given environment. A dedicated, free app enables users to further program the Smart Slider according to their individual requirements, allowing selected features to be activated with a single switch.

The AMBEO SMART HEADSET also features a Situational Awareness control that lets users choose the level of ambient noise they want to perceive. Using the headset's rocker switch, they can either select the Transparent Hearing feature which makes the ambient noise fade into their personal program and keeps them safe in traffic, or deploy the active noise cancellation to enjoy their entertainment without any distractions. The Situational Awareness feature can also be used when recording and when making a call and can be turned off when not needed.

The AMBEO SMART HEADSET is now available for Apple iOS devices featuring a Lightning connector. A version for Android devices is planned for release at a later date. The headset is priced at $299.95 (U.S.) and $399.95 (CAN). For ordering information, please visit http://www.sennheiser.com/ambeosmartheadset.

About Sennheiser
Sennheiser is shaping the future of audio – a vision built on more than 70 years of innovation culture, which is deeply rooted within the family-owned company. Founded in 1945, Sennheiser is one of the world's leading manufacturers of headphones, microphones and wireless transmission systems. With 20 sales subsidiaries and long-established trading partners, the company is active in more than 50 countries and operates its own production facilities in Germany, Ireland and the USA. Sennheiser has around 2,800 employees around the world that share a passion for audio excellence. Since 2013, Sennheiser has been managed by Daniel Sennheiser and Dr. Andreas Sennheiser, the third generation of the family to run the company. In 2016, the Sennheiser Group had sales totaling €658.4 million. www.sennheiser.com 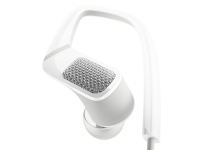