Old Lyme, CT -- (ReleaseWire) -- 04/18/2017 --For the truly adventurous, the ultra-rugged GoPro has proved a game changer - letting them share their adventures with the world. Yet while the video gets ever more striking, audio often struggles to keep up. No longer: Sennheiser's new, GoPro-verified MKE 2 elements microphone brings high-quality sound recording to GoPro's HERO4 Black and Silver cameras. Based on Sennheiser's professional microphone technology, the ultra-tough, waterproof microphone lets GoPro users take the next leap forward and add uncompromising sound to breathtaking video. The microphone is available starting 24 April 2017.

Designed to be the ideal audio partner to a GoPro HERO4 camera in its protective housing, the audio specialist's new MKE 2 elements microphone has been created to go anywhere a GoPro can. It easily withstands adverse conditions such as wind, water and snow.

"In the world of extreme sports, uncompromising sound quality remained a summit yet to be scaled. Until now, athletes have had to lower their expectations of audio and accept that there are scenarios where poor-quality recordings are inevitable or even when sound capture is impossible, for example under water," said Achim Gleissner, Commercial Manager for Broadcast & Media at Sennheiser. "The MKE 2 elements has been designed to break through these barriers in the same way that GoPro cameras have done, giving users the ability to add fantastic sound that makes action cam footage even more intense."

Rugged, waterproof and uniquely capable of taking on the elements

The MKE 2 elements is able to take on virtually anything GoPro users can throw at it, including activities like surfing, climbing or mountain biking. It is based on a professional Sennheiser lavalier microphone but with innovative design features that make it nearly immune to snow, ice, and wind. It is even capable of recording audio under water. This is thanks to an advanced capsule design with an internal Umbrella Diaphragm to protect its acoustically active membrane, a watertight connection with the camera's protective housing, and a special windshield. This newly-developed, replaceable windshield utilizes a special foam material that ensures that the mic can be used for water sports while fully retaining its wind protection properties. Unlike classic hairy or foam windshields that cease to offer wind protection when they become wet, the innovative new design keeps performing, whether wet or dry. Thanks to the mic's elastic suspension, it is insensitive to structure-borne noise.

Developed as part of the GoPro Developer Program, a framework that allows participating companies to create seamless integration with GoPro products, the MKE 2 elements has obtained the "Works with GoPro" seal of quality.

"Through our Developer Program we are very proud to be working with companies like Sennheiser to pursue a shared vision and create seamless user experiences between our products," said Ted Simonides, Director, Developer Partnerships at GoPro. "The MKE 2 elements epitomises this spirit of innovation and lets GoPro users take their adventures even further."

"Sennheiser is currently the only audio company that has obtained Works with GoPro verification, and the ground-breaking nature of the MKE 2 elements is a testament to the power of this collaborative and excellence-driven approach," said Achim Gleissner. "In parallel to bringing the MKE 2 elements to the market, Sennheiser is working on solutions for HERO5 cameras and is excited to continue to collaborate with GoPro as their products evolve."

Check out https://www.youtube.com/watch?v=xzj2EJvH44k&feature=youtu.be for audio samples. 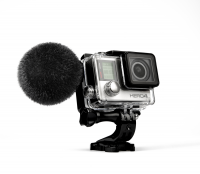