The objective of this campaign is to help psychics develop their skills to the pure Angelic level.

Cocoa Beach, FL -- (ReleaseWire) -- 02/08/2016 --As we go through the regular tasks of life, many of us suffer needlessly because we do not recognize the world-spanning wisdom and infinite intelligence that is within easy reach. Reverend Morgana Starr, Psychic Medium and Angel Communicator, is on a mission to bring the angelic messages to light. Throughout her career she has witnessed life changing miracles and healing from beyond this realm as a direct result of working with the angels. They are the most powerful and loving guides and helpers if we allow them into our lives. They vibrate at the highest of levels, working closely with the one true Divine Source, God.

More and more people are going to psychics everyday to find answers in their lives related to relationships, health and career. Kings, emperors, and even presidents have relied on the guidance of high quality psychics for centuries. What most don't know is that those highly sought out psychics are in direct communication with the Angels. It is Morgana Starr's mission to make the Angel's voices heard more loudly in this world.

With over 30 years of experience, Morgana and her associate Daena Dussich are on the leading edge of the psychic industry. They are surfing the waves of future potentialities as they create the first ever Angelic Call Center and Training School in the Cocoa Beach area of Florida. They are committed to training psychics to a higher Angelic level in order to be of service to humanity. Their Angel team is breaking through the boundaries of the old paradigm and moving forward into the new millennium.

Angels have been referenced throughout all of time and are mentioned in every major religion. No longer satisfied with the answers from organized religion, people are turning away from churches. According to recent census data, a mere 17% of Americans are church goers and the numbers are dropping every year. However, according to CBS news, 8 in 10 people are believers in Angels whether they are religious or not. The talented people Angel team maintains direct communication with the Angels and can give people the answers, comfort and security they are looking for.

The very first step for Reverend Morgana and her team is to make the Angelic dream a reality. An Indiegogo campaign has been launched to raise $33,000 for this project. Proceeds from this campaign will be spent to establish the first Angels Oasis™ in the Cocoa Beach area of Florida.

Through the center, they will provide in-person training as well as deliver the readings to people all over the world.

Backers to this crowdfunding campaign will enjoy preferred pricing on psychic readings as well as be able to participate in the education programs offered to help people cultivate their talents and join the Angelic team. In this way they will make a positive impact on the world.

About Morgana Starr
Reverend Morgana is an Angel Communicator and Psychic Medium who co-hosts on Google TV's Angels Unveiled ©. She was raised in the wilds of Africa by missionary parents. This along with looking for healing from Fibromyalgia and Chronic Fatigue syndrome has led Morgana to spirituality and her work with Angels. She is also a Native American Pipe Carrier, Reiki Master Teacher, Akashic Records reader, Psychic Development Teacher, Creator/Teacher of Angelic Arts® Certification Program and Past Life Reader. Reverend Morgana is an internationally acclaimed figure for her work as a Medium, her books, and private lessons. 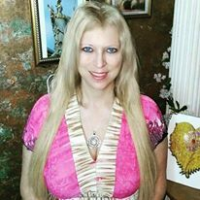