Reema Khan speaks to how powerful ambitions and a giving heart led her to raise money and awareness for women's empowerment.

Los Angeles, CA -- (ReleaseWire) -- 09/14/2016 --On May 21, 2016, Reema Khan, CEO of s.h.a.p.e.s Brow Bar, RMLA, and Reema Beauty set the new Guinness World Record for the most eyebrow threadings in one hour by one individual. The new record is 53 pairs, beating the previous record holder's number within the first 12 minutes. And what's best, she did it all to raise money and awareness for domestic violence.

"It wasn't even something I had set my mind on," states Ms. Khan. "We were already scheduled to participate in the LA Ultimate Women's Expo as a vendor. My event team was brainstorming on how best to use this platform to raise brand awareness and highlight our charities: Everyone is beYOUtiful and Feeding the Beauty Within. Consequently, one of our team members had this out-of-the-box idea to go after a World Record! She found out that someone had set the record for eyebrow threading in one hour and was so confident that I could beat it. I was so hesitant at first, but I started thinking about how women at the Expo could participate and help support our cause to fight for women's empowerment. There are so many women and children that are suffering from domestic violence and I just want to help them all as much as I can. So I said, 'Let's do it…. let's do it for them.'"

A chance to make a difference for women means the world to a woman of power like Khan. From being the owner of one small brow salon to becoming an icon in the brow business, she has been a model for success, hard work, and determination. Today, Khan is the head of a multi-million-dollar business with 55 s.h.a.p.e.s Brow Bar and 22 RMLA Makeover Bar locations across the US. All this success is alongside a celebrity-sought cosmetic line called Reema Beauty. She was featured as one of the 28 most powerful women by SHAPES magazine and is sought after for her advice by press, media, and business women around the world. And now, she has tackled what only a select few have done – broken and set a Guinness World Record.

About s-h-a-p-e-s Brow Bar
s-h-a-p-e-s Brow Bar, the pioneers of brow threading, started in 2003 when Reema Khan noticed a clear demand for her brow threading services. With women driving from all over just for a short threading session, Khan saw the opportunity to maximize and make people more aware of this burgeoning marketplace. Armed with her threading expertise and a mission to educate people about this ancient art, she launched her first brow bar at a local mall in Chicago. With the success of her first brow bar, Khan took the brow artistry experience to the next level and expanded the brow bar concept to malls across the U.S. Equipped with great brow shaping techniques, an affordable price point, and a growing demand, s-h-a-p-e-s Brow Bar set forth the next level of beauty – the brow bar experience – and turned one woman's vision into a flourishing business. 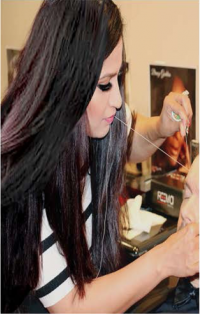 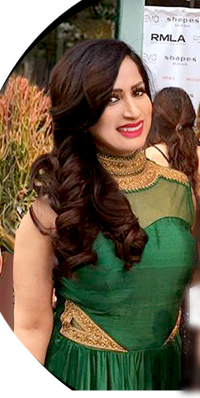