Showing off Our 'Lady Bits'

Toronto, ON -- (ReleaseWire) -- 05/02/2017 --You don't have to be a video gamer to be aware of the ongoing war over the depiction of women in video games, inflamed by the provocations of alt-right operatives and the attacks on video games and male gamers by radical feminists. And with a new volley just released by leading feminist critics, the war is set to overheat once again.

Not that moderate feminist & gaming analyst Liana Kerzner is conflict averse, having shut down some of the most belligerent online voices like Milo Yiannopolous. He declared war on her but left with his tail between his legs (he blocked her on twitter)!

Liana is the creator, producer, writer & host of Lady Bits, a new online series looking at women in video games that asks some of the issue's toughest questions and lets viewers determine their own answers, looking to bypass the culture war by not taking a side. Which is, in itself, controversial.

Liana Kerzner is an award-winning TV producer & writer (Muchmusic's Fromage, Citytv's Ed & Red's Night Party among others), media personality and advocate for women in the media. She's been an avid gamer since she was three years old and played the arcade version of Pac-Man -- or as she called it at the time, "bucka bucka".

The launch of Lady Bits happens to coincide with the end of controversial online series Tropes vs Women, which Liana initially supported. "But I'm concerned that the series may have done more harm than good," says Liana, "the harassment narrative became the story. Women can't be seen as leaders and victims at the same time."

These questions and more in Lady Bits are a minefield. Both sides have entrenched answers, and some feel the questions shouldn't be asked at all.

"Video games made me a feminist." Kerzner insists. "I remember seeing Roberta Williams' name in the King's Quest credits when Judy Blume was being crammed down my throat. In video games, the player helps the female main character win. Video games gave me hope when other media was telling me that I was doomed by my gender. Accepted feminist literature like The Handmaid's Tale is pretty bleak."

Lady Bits is the first series commissioned for FUN - The FU_Network and is a follow-up to Kerzner's successful A Gamer's Guide to Feminism online miniseries which bridged the gap between gamers and feminists through humour, honesty and objectivity. Lady Bits is supported through a newly launched Kickstarter by people who want to keep the spirit of authentic, frank & funny media alive in Canada and around the world.

The crowdfunding campaign runs until the end of May with plans to premiere the series on YouTube in the fall. The Kickstarter can be found here: http://goo.gl/HFbWhb

About FUN – The FU_Network
FUN - The FU_Network recalls the live spirit and energy of classic Muchmusic integrated with the most current tech, social media and interactivity to create a channel that is immediate, authentic, smart, unpredictable, anarchic and interactive. Politics, current events, social issues, comedy, music, entertainment, tech & gaming and more, the FU (For Us)_Network packs its content with wit, authenticity and relatability that suits its slogan, 'Smartass begins with 'Smart'. 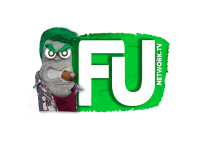