Denver, CO -- (ReleaseWire) -- 11/26/2014 --Silver Bullet, an award-winning, cutting-edge water treatment company, announces that its technology has been proven by third party researchers in lab and field trials as a powerful solution in the reduction and control of Vibrio parahaemolyticus, a bacteria which has been devastating the shrimp aquaculture industry. Vibrio parahaemolyticus, which has both virulent and benign strains, causes Acute Hepatopancreatic Necrosis Disease (AHPND) or Early Mortality Syndrome (EMS) in shrimp (Lightner et al., 2013). AHPND damages the digestive system of shrimp and causes mortality, often within thirty days of stocking. Vibrio parahaemolyticus tolerates a range of salinities, pH and temperatures, readily attaches to marine plankton and may be spread by ocean currents (Chamberlain, 2013). The disease has caused significant loss for the shrimp aquaculture industry worldwide, the result of which has been catastrophic loss in shrimp production, jobs and profit.

The Silver Bullet was found to successfully reduce the amount of Vibrio parahaemolyticus, maintain those bacterial counts at low levels and promote shrimp survival. The Silver Bullet generates its disinfectant from ambient air onsite, so does not involve the risks and dangers associated with storing and handling toxic chemicals. The system has proven to be safe to shrimp and is designed in a way that is easy to install, user friendly and affordable. Employing the Silver Bullet for shrimp aquaculture is a valid approach for protecting shrimp from pathogenic contaminants that are otherwise devastating the shrimp aquaculture industry worldwide.

Dr. Silvia Gomez and her team at Centro de Investigación en Alimentación y Desarrollo A.C. (CIAD) Government lab in Hermosillo, Mexico have been analyzing several different strains of Vibrio parahaemolyticus and working on finding a solution to eradicating this devastating disease. Recently, Dr. Silvia Gomez and her lab at CIAD have verified a dramatic increase in shrimp survival from the use of the Silver Bullet Water Treatment System. The Silver Bullet conditions water using a highly effective US Environmental Protection Agency (EPA) recognized method of disinfection called an Advanced Oxidation Process or AOP. When applied to water, the patented and affordable technology has been proven to reduce pathogenic bacteria and biofilm, while maintaining a small residual of hydrogen peroxide for lasting biocide activity. The result has led to >90% survival of shrimp in laboratory testing despite exposure to >100,000 (105) colony forming units (cfu) of the most pathogenic form of Vibrio parahaemolyticus. In addition, the technology keeps calcium dissolved in water to promote the uptake of calcium ions for shrimp shell hardening and growth. It is postulated that shrimp with harder, healthier shells may stand a better chance at warding off pathogenic bacterial biofilms from forming.

Dr. Silvia Gomez stated, “Most farmers throughout Mexico have been experiencing close to 80% mortality of their shrimp in consecutive seasons over the last year. We have seen promising results in lab applications and now a full scale field application of the Silver Bullet Water Treatment system’s oxidizing capacity to reduce and control the levels of Vibrio parahaemolyticus, while causing no harm to the shrimp. We have replicated lab tests where we found the exact doses of Silver Bullet gas needed to avoid reaching toxic levels of pathogenic strains of Vibrio parahaemolyticus and achieve high survival rates in the shrimp.”

The Silver Bullet is safe for shrimp and is easy to install. Installation takes less than a day and the unit is rented on a monthly basis so that there is no large capital outlay, making it an affordable, portable option for shrimp farmers. Additionally, the Silver Bullet differs from other systems because it treats water without water passing through the unit. Instead, ambient air is modified and bubbled into the water to complete the non-toxic disinfection process.

Dr. Donald Lightner, renowned researcher from the University of Arizona Shrimp Pathology Research Lab has also analyzed and validated the Silver Bullet Water Treatment’s effect “We verified in our lab that the Silver Bullet was able to successfully reduce the amount of Vibrio parahaemolyticus without having a toxic effect on the shrimp.”

Hope for the Mexican Shrimp Industry

One farm using the Silver Bullet Water Treatment System just completed harvesting healthy shrimp and reported an average shrimp survival rate of 86%. The owner, Alberto Soto, of Grupo Quinto Día, has been using The Silver Bullet Water Treatment System on his farm and is elated with the results. The farm, Topolobampo, in Sinaloa, Mexico, has 205 hectares (506 acres) of surface water, split into thirty five ponds. His farm has a production capacity of 960 tons of shrimp that was exported to the US and Europe prior to the Acute Hepatopancreatic Necrosis Disease epidemic. Like most of the other shrimp farms in Mexico, Quinto Dia saw a dramatic drop in total production in 2013.

Silver Bullet is installed on four ponds (a total of twenty hectares) out of the thirty five total ponds on the farm. The four ponds using the Silver Bullet technology reported an average survival rate of 86% which is much higher than the current industry average of 50% survivability due to AHPND. It is important to note that this drastic improvement in shrimp yields were achieved with no additional treatments other than the Silver Bullet (i.e.no probiotics, no EDTA, no disinfectants, etc.) from the post larvae to adult stage.

Alberto Soto stated “I consider the Silver Bullet Technology a beneficial tool for the health and productivity of shrimp production, and the tool of the future for aquaculture.”

“We are delighted by this independent validation of our technology recognizing that the Silver Bullet Water Treatment System is a promising tool for the shrimp aquaculture industry in its ongoing battle against pathogenic bacteria like Vibrio p.”, said David Sunshine, CEO of Silver Bullet.

“Our patented technology harnesses nature’s own process to condition water and improve its performance without the use of toxic chemicals. Silver Bullet is offering hope to the aquaculture industry that has been decimated by this disease.”

The Silver Bullet Water Treatment System has repeatedly and successfully reduced and controlled the growth of pathogenic strains of Vibrio parahaemolyticus while enhancing shrimp survival rates. It is an affordable, easy solution that is offering hope to shrimp farmers and helping them successfully overcome the AHPND epidemic that is devastating the shrimp aquaculture industry worldwide.

In 2012, Silver Bullet was recognized with the Best Venture award from the U.S. Department of Energy’s National Renewable Energy Laboratory (NREL) for its cost effective and environmentally responsible water treatment solution. For more information, visit www.silverbulletcorp.com. 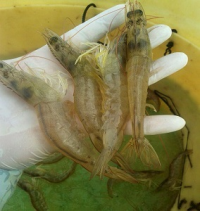