Singer-Songwriter Natalia Safran Teams with DJ/Producer Cajjmere Wray to Remix Tribute to Paul Walker, "All I Feel Is You"

Los Angeles, CA -- (ReleaseWire) -- 11/26/2014 --L.A. based singer-songwriter Natalia Safran has teamed with Canadian DJ/Producer Cajjmere Wray to remix her single “All I Feel Is You” into a driving tribal/house anthem, an ode to love lost and one man’s life defying struggle. The original single exuded a haunting, indie feel which quickly resonated with Safran’s legions of fans.

For the remix, Wray weaves Safran’s bellowing vocals into a richly layered tribal vibe to create a sound that is solemn, but undeniably sexy, and beckons the listener to the dance floor.

“All I Feel Is You,” written and performed by Safran, is the featured track in the movie “Hours,” starring her good friend and collaborator Paul Walker. Following Walker’s fatal car accident on Nov. 30, 2013, Safran vowed to honor his spirit by giving back to the community whenever possible.

With the new, smoking hot dance track, Safran comments, “The original song was going to be just a closing to a beautiful film that was “Hours.” Then suddenly, because of the tragic events, became a tribute to the man we all loved and admired. The remix brings the song into another world, gives it a whole new life, so I guess the tribute lives on in another form too.”

“All I Feel Is You – Cajjmere Wray Club Mix” is currently being circulated to DJs and dance music tastemakers around the world. The commercial remix package will be available later this fall on iTunes and other online dance music retailers.

About Natalia Safran
Singer and songwriter, Natalia writes, produces and performs her music with brother Mikolaj Mick Jaroszyk. Her debut album ’High Noon’ was funded entirely by fans from all over the world via a crowdfunding music community Sellaband, where she quickly rose to the top of over ten thousand artists, in record time gathering $50,000 to produce her album. 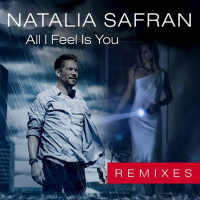