SMAO, the Smallest Drone in the World, Has Successfully Raised 87 Thousand Dollars by Crowd-Funding on Indiegogo

Shenzhen, China -- (ReleaseWire) -- 08/24/2017 --Recently, a drone named SMAO has accomplished its crowd-funding on the Indiegogo platform successfully, which has received support from 981 Backers and realized 870% of the setting goal by raising 87,060 dollars.

Considering the orientation of the product, the 2.56 inches of the fuselage and the weight of 40g make SMAO become the smallest "pet on fingertips" in the world. Users can carry it with them and fly it directly anytime and anywhere. In addition, the price of 79 to 89 dollars is another significant reason for the success of the crowdfunding.

Of course, the features of SMAO are the core of its success. In the campaign page of SMAO, the producer uses three words "safest, funniest and smartest" to describe the features of the smallest photographic drone in the world.

Take the aspect of safety at first. As for the shell structure, SMAO applies the high-intensity grid armor and has passed thousands of crash tests. Moreover, the internal configuration shows its excellence more obviously. Its built-in barometric altimeter system can keep the drone hovering motionless. And the emergency stop function and one button recall function of the software can avoid bringing harm to others due to operation errors.

Hardware collocation in various aspects contributes much fun to SMAO. As for the image, It is equipped with 2K HD camera which meets the photographic needs of HD photographing and 720P video. The real-time transmitting technology allows users to take photos, make films and upload pictures in real time, and to share their happiness with friends. Even, the 2K camera can become users' eyes through VR glasses whenever users need. As for operation, SMAO can not only be controlled by cell phones in WIFI environment, but also combine cell phones with high accuracy remote control. Through the improvement of operation, users, who pursue the controlled flight extremely, are able to complete various acrobatic maneuvers such as 360° turn, passing barriers through narrow space, and stopping abruptly and moving parallel in the air.

Intellectualization is another highlight of SMAO. From the actual use effects of the product, SMAO almost redefines the operation mode of drone. If users doubt their fight skills, they can mark the trajectory on their cell phone' screens, and SMAO will fly precisely along these trajectories. At the same time, users can also control the flight of SMAO through gravity sensors of cell phones. Except for various kinds of smart control, there are different system languages for users' choice.

Although crowdfunding campaign of SMAO on the Indiegogo platform has finished, anyone wants to buy it, people can still get it at a discount price of 89 dollars in the state of Indemand. 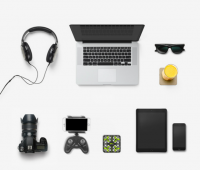