Bradenton, FL -- (ReleaseWire) -- 03/05/2013 --One of the world’s biggest killers is the traditional tobacco cigarette and for decades, smokers have been warned of the dangers and implications of smoking. However, the addictive qualities of the cigarette have made it nigh on impossible for many smokers to quit, despite an array of alternatives being offered to the smoking public. But now, with the meteoric rise of electronic cigarettes, this picture may change, as smokers are switching to this smoking alternative and at present, the results look promising.

Large long-term clinical trials have yet to be undertaken regarding the long-term safety and health implications of using electronic cigarettes, which makes it impossible to propose that these products are entirely beneficial to health and welfare; however, there is mounting anecdotal (user) evidence that there are some obvious advantages that the e cig user enjoys, and smaller trials are showing that they are significantly less harmful than tobacco cigarettes.

First and foremost, one of the most obvious differences and benefits to electronic cigarettes from their tobacco alternatives is the lack of smoke. Many non-smokers become frustrated when in the company of those smoking tobacco cigarettes. The smoke produced can be noxious and some individuals become irritated breathing in second-hand smoke, as they find it offensive and disgusting. Plus, there is evidence that second-hand smoke may affect the health of those exposed to it, and many quite rightly want to avoid this.

The electronic cigarette allays this issue, as it does not produce smoke at all. The substance that is exhaled by the person enjoying the e cig is water vapour, and is considered by many to be far more pleasurable to be around than cigarette smoke. It is largely scentless, at the most there is a faint aroma from the flavoured e-liquid being ‘vaped’, it does not attach itself to the smoker or to clothes of others, or to the surroundings. And surprisingly, it is still possible to blow ‘smoke’ rings with water vapour.

Additionally, electronic cigarettes do not contain any tobacco. The tobacco within traditional cigarettes contains thousands and thousands of different chemicals, of which many are potentially hazardous to the health of the smoker. These toxic chemicals are not present in the electronic cigarette, as there are four simple ingredients, nicotine, propylene glycol, vegetable glycerine and flavours.

About Totally Wicked
Totally Wicked supply Electronic Cigarettes throughout the world to many different shops and suppliers. 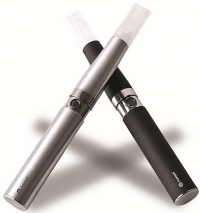