So You Think You Can Dance?

New York, NY -- (ReleaseWire) -- 06/15/2016 --At the tender age of 2, Asher Laub thought his journey to a professional career as a violin soloist was written in stone. Little did he know the obstacles he would encounter, as an adolescent with poor overall health, chronic back pain, progressively weakened immune system, and low blood pressure, that would force him out of a promising career as a solo violinist.

Asher was okay switching careers to a NYC public school science and music teacher for 4 years as he worked to regain his strength. Despite his recovery efforts his status progressively worsened ultimately landing him in the ER with the "permanent" diagnosis of adrenal insufficiency.

After months struggling to fall asleep, using a bed pan, requiring family members to take over all the daily logistics of his life, he was confined to a wheel chair on steroids. He remained hopeless and in despair for a period but refused to accept defeat.

Asher spent months reading a range of medical text books on his condition which ultimately led him toward a gradual, yet miraculous recovery to full and unprecedented health! 2014 was a year of mending the family wounds, and the pursuit of self-discovery. Asher perceived it as a year that, while indeed painful, yielded the ultimate benefit to him and his family. He learned to unveil coping tools that helped him prioritize the things that really mattered in life - staying present in the moment, connecting with family and friends, and pursuing the things he truly loved such as music.

What emerged from an experience that seemed, at the time to be hell-on-earth, was a glimmer of hope that led Asher to a hidden passion and talent - breakdancing while playing violin with uncanny versatility. And so, with a semester off from NYU, Asher produced and choreographed his very own music video to rebuild the remnants of an old music career.

Executives at LG Sprint discovered Asher and invited his team of performers to the Franklin Institute in Philadelphia to assist with the launching of their latest and greatest cellphone, the LG5.

Asher's meteoric rise from literally using a bed pan to performing flips with electric violin in hand before thousands of cheering fans, in such a short period, still has many puzzled but enlightened and inspired. Asher is grateful for the financial, physical and emotional support received from family and friends in his darkest moments and plans to use the advent of his ever-expanding electric violin show to inspire others that creative and unconventional thinking may often improve the quality of people's lives, even in the face of seemingly insurmountable odds.

Asher is scheduled to perform at some very large festivals in the coming months so make sure to subscribe to his website and youtube channel for regular updates. His next big outdoor concert begins on 16th of June, at 6pm in SOHO at 76 Varick Street, Manhattan, NY. It will be open to the public, sponsored by Mountain Dew and Pepsi, and filmed by MTV, Nickelodeon, Viacom, and Comedy Central among others.

Asher is hard at work on his first EDM single and music video, with plans to collaborate with another big name for its release so stay tuned!

To learn more about Asher you can visit his website at http://www.asherlaub.com 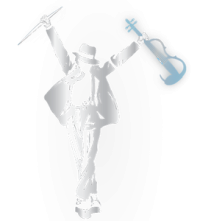