Kansas City, MO -- (ReleaseWire) -- 10/27/2016 --Sognar Strap is set to launch an Indiegogo crowdfunding campaign for its versatile GoPro mount. The strap was inspired by high-performance backcountry utility straps, thanks to their strength and durability.

In order to use the mount, users simply wrap the strap around any stationary object (up to 15 inches in diameter) and secure it using the attached buckle. The strap stretches a bit for a snug, secure fit. To remove the strap, users simply unhook the buckle in one easy movement.

Once attached, the camera mount can rotate through a full 360 degrees, enabling the user to capture panoramic footage. The strap comes with the GoPro mount and attachments are also available for smartphones and SLR cameras.

The brand name, Sognar, is an amalgamation of "so" and "gnarly," thus Sognar, pronounced like "sonar." The creators are launching the Indiegogo campaign to raise money to fund manufacturing of the buckle closure. Currently, the creators are making the buckles by hand, so moving to machine manufacturing will enable mass production of the Sognar Strap.

The campaign has yet to launch but is expected to go live by the end of October 2016. The campaign has a flexible funding goal of $5,000, meaning that the creators will receive any funds generated, even if they do not reach their full goal amount. If the campaign receives more money than the goal amount, additional funds will go towards producing mounts and straps in a range of colors and to producing an XL version of the strap, offering added thickness and strength.

The creators of the Sognar Strap expect to begin their first small batch of production in 2016. They will begin shipping finished products to customers starting in January 2017. Backers of the campaign also have the option of purchasing one of the 40 prototype models for immediate shipping. They can obtain this reward for a minimum campaign contribution of $75. 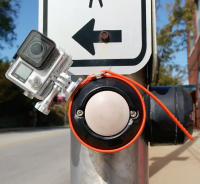