SOSO Is Bringing the World's Most Innovative Product to Market

SOSO World has launched the ‘SOSO - The World’s First Case & Charger in one!’ project on Indiegogo. This campaign is raising the funds needed to bring a highly innovative and inspired iPhone and iPad charging case to market.

Izmir, Turkey -- (ReleaseWire) -- 03/17/2016 --Thomas Schuh, the CEO and founder SOSO World, has launched a crowdfunding campaign on Indiegogo. This campaign has a funding goal of $25,000, which needs to be raised in order to bring the world's most innovative phone case to market. SOSO is a case for iPhone and iPad that doubles as a charger, making it the world's first all in one phone charger and protective case. As Schuh aptly states, "When you buy a new smartphone, the first two things you think of are always the same: you need a case, and you need a charger. Without the case, your phone will break. Without the charger, your phone doesn't last long. The SOSO Charge Case is the perfect solution to these problems. A charger and case in one."

In today's modern world, nearly everyone has a mobile phone. The problem with today's smartphones is that the battery dies quickly with frequent use, often requiring people to carry their charging cables with them, which isn't always convenient. This is where SOSO becomes the solution everyone needs. The designer integrated the USB charging cable into the case by using a labyrinth design. The cable simply unfolds when needed, then easily slots back into place when done. The unfolded cable is 1.58 feet in length, and the case itself is no larger than other cases on the market, ranging in size from 8mm – 9.8mm wide and 2.8mm – 3.85mm tall. SOSO comes in various versions for the iPhone and even offers versions for iPad users as well. The iPad SOSO case comes with added functionality that is iPad specific, and doubles as a stand. All versions of SOSO will initially be available in 3 colors: White-Grey, Black-Grey, and the dark pink shade "SOSO Special".

The team at SOSO World has been working very diligently on all of the essential groundwork SOSO. They are now ready to begin the process of bringing the charging case to market which is why they have launched their Indiegogo campaign, and hired a team of crowdfunding specialists to help them spread the word. As an added bonus with this campaign, the team is offering several perks. These perks, which serve as funding incentives, range in value from a "Thank You' perk that enables a supporter to follow the campaign and receive all of the updates, to the opportunity to pre-order the SOSO charging case for iPhone or iPad at a substantial savings off of regular retail price. The team has a projected delivery date of July 2016 for all pre-orders and perks. Full details can be found on their Indiegogo campaign page.

About SOSO World
SOSO World is the inspired brainchild of creator Thomas Schuh from Germany. The team consists of a talented group of professionals who each have extensive experience in their individual areas of expertise. The company focuses on producing innovative and inspired ideas for the modern world. The SOSO charge case was inspired by Schuh's five-year-old son Leon, who loves to play with his dad's phone.

To learn more about the SOSO crowdfunding project Click Here

To contact via email write to Jimmy George at: jimmygeorge@yahoo.com

To learn more about the team of specialists at Smart Crowdfunding 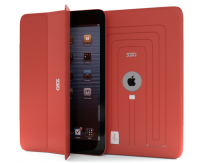