Looking to garner widespread support and the necessary financial backing to make large-scale production possible, Spacetime is asking investors to consider the originality of their engraved solar system product, made with NASA data.

"With details so finite and precise, we were able to create a version of customized mementos, bringing new meaning to a special date or time in your life," said Martin Vézina, of Spacetime Coordinates Corp. "Using the same data that is released by NASA to predict eclipses and spacecraft trajectories, we are able to provide the most accurate star and planet alignment mementos on the market to our clients today."

Spacetime calculates the precise position of each planet on its orbital path, given any particular date in time. Boasting such precision, their Orrery has been featured on OpenNASA.

The new Acrylic and Wood Mementos are added to the already existing metal memento style, making them more accessible and affordable to the public. By adding acrylic and wood to the picture, Spacetime is hoping to democratize space interest.

"We believe everyone deserves access to this kind of space intelligence and remembrance, which is why we're doing it with acrylic and wood," said Pouliot. "Now onto our 4th Spacetime Coordinates project, we are asking all interested crowdfunding investors to head over to our page and learn more about infinite remembrance engrained in the sands of time." 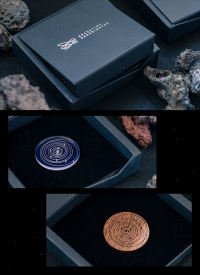