De fuego launches crowdfunding project on Kickstarter to raise money to produce their second album entitled, “Davide”. The album will be a loving homage to the late instrumentalist and original De fuego guitarist, Davide Lufrano Chaves.

London, UK -- (ReleaseWire) -- 01/05/2015 --Hoping to bring a new album to their fan base in Europe and abroad, the Spanish guitar duo De fuego enjoys astounding crowdfunding support. Having launched a project on Kickstarter to raise funds for their newest album "Davide", the guitar duo is 76% of the way to their 2000£ goal. Named for one of the group's original members, Davide Lufrano Chaves, the album will beautifully pay tribute. Chaves passed away at the age of 30 in December 2013 from multiple myeloma.

Edina Balczo the original founder of De fuego said of Davide's passing, "Davide was my best friend, my music, my partner. To say the least, losing him has been a great challenge especially at this time of year. But with time to reflect, I know he wouldn't want this music to die. So, I must carry on." And carry on she does; the De fuego also supports the Myeloma UK Cancer Charity.

Joined now by an amazing guitarist in Marc Rodriguez Alvarez, Balczo performs again. The Spanish guitar duo traveled to 17 summer festivals this year in the UK in addition to their European tour. The tour included visits to France, Germany and Spain. UK summer festivals where fans enjoyed their mix of instrumental flamenco and rumba-based music included Glastonbury, the Secret Garden Party, Sziget Fesztival (HU) and Shambala.

Combining the sounds of flamenco, rumba and percussive guitar, Balczo and Alvarez have all the songs written for the new album, "Davide". Funding for the Kickstarter project will be used for recording, mixing and mastering of the CD as well as for its artwork. Funds will also cover printing, distribution online, and the organization of the CD's launch. Hoping to exceed their project goal, De fuego will then hire a publicist and radio plugger to take the music worldwide.

Some crowdfunding perks include a digital download of "Davide", tickets to the CD launch and a guitar lesson with one of the members in London or via Skype.

About De fuego
De fuego is an energetic instrumental flamenco and rumba-based music duo made up of guitarists Edina Balczo and Marc Rodriguez Alvarez. The Spanish guitar musicians offer the marketplace for an upbeat sound imbued with passionate percussive guitar techniques. Quickly becoming a hit at UK music festivals, De fuego completed a European tour in 2014. De fuego has one album in wide release entitled "Bluebird". 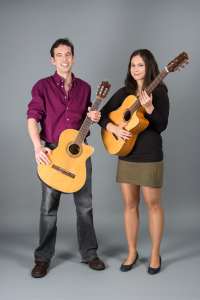