The restaurant industry is in need of great chefs. Restaurant owners petitioning for a specialty chef can be an option.

Salt Lake City, UT -- (ReleaseWire) -- 01/14/2019 --Every year, the U.S. government gives out a certain number of employment-based visas. For all countries except for China, India, and the Philippines, the category that would correctly be used for specialty chefs is the EB-3 skilled worker category, and there is no waiting period other than processing times. There is a waiting period for certain countries where a lot of people have applied for that particular category of visas because there aren not enough visas to give out, there is a backlog.

China and India are the two countries with the highest amount of people applying for employment-based visas, so there is a backlog for those two countries. For example, if an employer is petitioning for a specialty chef from China, the November 2018 visa bulletin shows the priority date as August 8, 2015. This visa bulletin is updated every month, and the dates change based on the number of visas that are given out during any particular month.

What the August 8, 2015 date means is that employers who had submitted their PERM applications on that date, and have already filed the immigrant petition for the foreign worker that has been approved, those workers would be eligible to apply for their green cards during this time. To get some context of the waiting period, based on November's visa bulletin, a foreign worker from China would have to wait approximately three years and three months to be able to begin the green card process.

An example where an Italian restaurant owner wants to hire a specialty chef from Italy who has at least two years of experience as a chef in that cuisine. In that scenario, the restaurant owner could start the process, and the visa bulletin is considered current for that particular skilled worker category for somebody who is from Italy.

As part of the process, there are documents and evidence required to prove to the U.S. Department of Labor that there are no available qualified workers in the U.S. to fill the position. Some of the requirements that USCIS (the United States Citizenship and Immigration Services) will want to see is that the employer followed the required steps to attempt to recruit, that the worker does have the experience and qualifications, and the employer can pay the specialty chef the prevailing wage that has been determined by the Department of Labor. For example, they would want to see any certificates the chef has received for chef training and schooling, letters from employers they have worked for and what relevant experience they have, and proof of income from the employer such as, business taxes and financial statements.

Restaurant owners genuinely do have a hard time filling these positions. The restaurant owner will get that specialty chef needs. Another upside is that the specialty chefs will also be able to include spouses and any children unmarried and under 21 in the green card process.

This scenario would not apply to any workers who are here in the US and do not currently have any legal status or are out of status.

If you are a restaurant owner facing this problem, this process is a viable solution. 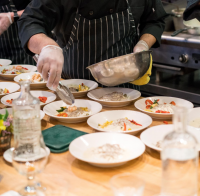