Stalk It™ Introduces Its First High-Performance Longboards Made For Women

McKinney, TX -- (ReleaseWire) -- 10/14/2011 --Stalk It™ Longboards, a maker of high-performance longboards announces the release of a new model in its line of Signature Series Longboards. The new Stalk It™ 48Five Alana Blanchard Signature Series is endorsed by pro surfing sensation, Alana Blanchard. The new board is the first women-specific board in the Stalk It™ line and highlights the growing appeal of the sport of longboarding to women.

This board was designed in response to the many women surfers and snowboarders that are increasingly using longboarding as an off-season cross-training sport and workout. Waves can be fickle and snowfall can be scarce at times, but boarders of all disciplines know that smooth roads are there through the seasons. This fact has led to the increase in the cross-over appeal of longboarding as a year-round sport in most areas.

Alana Blanchard is part of the new breed of women surfers that compete at the highest levels in their sport and also cross over into mainstream entertainment, modeling, and fashion. Based in Kauai and traveling the globe in pursuit of waves and surfing competition, the Women’s ASP 16th ranked Blanchard is the perfect representative for the independent active women that is attracted to the sport of longboarding. Ms. Blanchard’s list of endorsements is as impressive as her surfing accomplishments, and Stalk It™ is excited to be associated with her as a new partner.

Blanchard’s first Stalk It™ signature longboard features graphics that play off of her burgeoning modeling and fashion career. The custom AB logo and color scheme help to separate the board from others and highlight the fact that women longboarders also demand the highest quality boards. The model comes equipped with cutting-edge components. The technology, quality, and craftsmanship of the components add to the board’s plush ride and provide the responsiveness that Blanchard demands of her board.

The decks of all Stalk It™ Longboards are made from an innovative new material, called CornBoard™ which is engineered specifically for Stalk It™ Longboards. CornBoard™ is a renewable and environmentally responsible material that is made by combining leftover corn husks and leaves with a resin under heat and pressure. Since CornBoard™ is specifically engineered for each product that it is put into; it is the perfect material for the core of the Stalk It™ 48Five deck. The 100% CornBoard™ core is sandwiched between layers of vertically laminated ash and poplar that make up the top and bottom of the board. The composite structure of the vertically laminated hardwoods and the 100% CornBoard™ core give the deck strength while still maintaining the responsive feel that longboarders crave.

The 48Five Alana Blanchard Signature Series is the first women-specific board to be released by Stalk It™. The Stalk It™ mission of: Re-Use, Re-Purpose, and Re-Imagine materials to Respect our home and environment meshes with Alana Blanchard’s deep love of the ocean, her ecological awareness, and respect for the environment.

About Stalk It Longboards:
Stalk It™ Longboards was founded in McKinney, Texas in 2009 by Lane Segerstrom. Stalk It™ uses CornBoard™, a non-wood engineered pressed board material made from leftover corn stover (husks, leaves, and stalks) for the core of its high-performance low-ECO impact longboards. 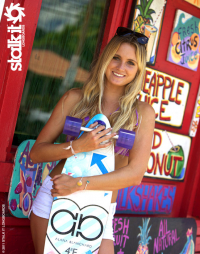 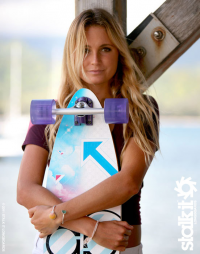 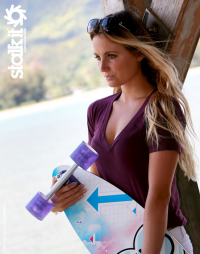 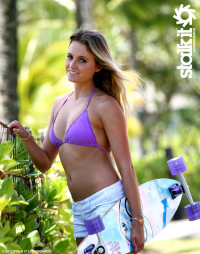