McKinney, TX -- (ReleaseWire) -- 10/20/2011 --Stalk It™ Longboards, a maker of high-performance longboards announces the release of a new model in its line of Signature Series Longboards. The newest release in the Stalk It™ 48Five Signature Series is designed by Brooklyn based street artist, Mr. Kaves.

The graphics on the new 48Five Mr. Kaves Signature Series longboard captures the unmistakable style of the legendary New York street artist. Kaves’ gritty style and bold graphics capture the motion and pulse of the city environment that he calls home. The vivid colors and Brooklyn street scenes reflected on the board evoke the sights and sounds of the cityscape and add the swagger of a B-Boy as riders push this board through the bustling city streets. Stalk It™ is excited to debut the new 48Five Mr. Kaves Signature Series longboard.

About Mr. Kaves
Kaves' style sprung from the streets of Brooklyn and Hip-Hop culture and has been featured far and wide throughout his career. Bay Ridge, Brooklyn has served as the source of inspiration for Kaves’ many creative outlets, beginning with his distinctive street art.

Mr. Kaves is also a pioneer in the world of Hip-Hop with his band The Lordz of Brooklyn. Since the early 1990’s the band has been an influential presence in the New York Hip-Hop and Punk scenes. Kaves’ work in the music industry hasn’t been limited to musical performances, he has also produced logos and images for The Beastie Boys and Everlast.

His designs and images have been featured in products and campaigns for Nike, Adidas, Pony, MTV, Vans Warped Tour, and Rockstar Games. His original paintings are in museum collections and even hang in the Rock and Roll Hall of Fame.

Mr. Kaves also owns and operates a successful art, apparel and tattoo shop called Brooklyn Made Tattoo. This shop serves as the hub for his creative enterprises.

About Stalk it™ Longboards
All Stalk It™ Longboards are made from an innovative new material, called CornBoard™ which is engineered specifically for Stalk It™ Longboards. CornBoard™ is a renewable and environmentally responsible material that is made by combining leftover corn husks and leaves with a resin under heat and pressure. Since CornBoard™ is specifically engineered for each product that it is put into; it is the perfect material for the core of the Stalk It™ 48Five deck. The 100% CornBoard™ core is sandwiched between layers of premium hardwood. The composite structure of the laminated hardwoods and CornBoard™ core give the deck strength and stability while creating a responsive feel that riders crave.

About Stalk It™
Stalk It™ Longboards was founded in 2009 by Lane Segerstrom. Stalk It™ uses CornBoard™, a non-wood engineered pressed board material made from leftover corn stover (husks, leaves, and stalks) for the core of its high-performance low-ECO impact longboards. 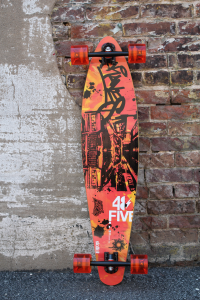 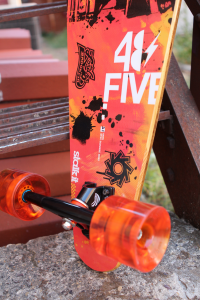