"Growing concern with the safety of our food supplies, the dramatic increase in the costs of fresh produce here in Canada (and Northern Europe for that matter) and a lack of technology tools for the millions of current and potential urban farmers to commercialize the growing demand for fresh, transparent local produce."

The Urbanfarmers eCommerce Marketplace it built to grow as an urban community exchange, bringing gardeners and neighbours together for the fair, direct trade, sale or gifting of local produce as well as acting as an educational hub and community network of services, merchandise, supplies, experience and truely local community resources - all targeted to support growing urban agricultural communities.

"They recognize the direct and indirect benefits which urban agriculture brings to cities; improved health and eating habits correlate to lower health care spending - collaborative community garden projects which bridge age and racial lines help to lower crime and bring neighbours together - backyard gardening and produce consumption reduce urban greenhouse gases, transportation costs and fuel burn while removing pecticides from the food lifecycle, all the while bringing us back in touch with the earth."

For Michael this isn't just about a great new agro tech or startup story. When his wife Angelica was diagnosed with a pancreatic endocrine tumour in late 2015, the couple and their children reconnected with the food that became such an important part of Angelica's treatment and recovery. Their learnings and journey into organic backyard farming gave birth to the concept which has evolved into the Urbanfarmerz Marketplace.

"Our next step on the road to seed funding is to raise money from our crowdfunding campaign to match those we've set aside or already invested in getting the model up and running" said Sheldon. "We know there's a huge community of gardeners and backyard farmers out there, and we've lined up some great perks to reward their support and belief in our model. Dig deep folks! Give up just one frappuccino this week for urban farming!" 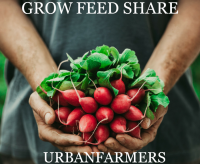